The Secret Place: A Novel by Tana French 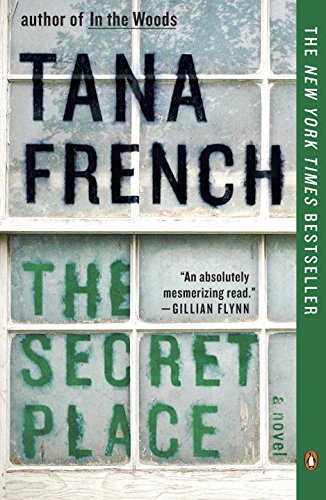 Tana French’s brilliant new novel, The Secret Place, takes place at an elite all-girls school in Dublin, Ireland. A seemingly idyllic location, St. Kilda’s is also the location of a year-old unsolved murder, that of popular Chris Harper, one of the boys from a neighboring all-boys school. The case is considered cold – that is, until Holly Mackey, a sixteen-year-old student at St. Kilda’s and the daughter of a fellow detective, brings Detective Stephen Moran a note from her school’s anonymous note-posting board. The note, featuring a picture of Harper, contains the following message: “I KNOW WHO KILLED HIM.” Holly, having testified in a murder case Moran was working when she was just a child, has a rapport with Stephen that lends credibility to this anonymous tip. This new information brings the case back to life – and provides Moran the opportunity for his big break. Joining Dublin Murder Squad’s Antoinette Conway – a detective who does not fit in with her squad-mates (to say the least) , an abrasive, stubborn, and driven woman – Moran works to uncover the secret of Chris Harper’s demise…and is met with a much bigger mystery than he could have foreseen.

While The Secret Place is part of a series, French’s storyline is so powerful and so able to stand on its own that once not need to be previously acquainted with the characters (Holly Mackey, her father Frank, and Moran, for example) or with French’s fictional Dublin Murder Squad to feel a part of the action. The novel’s exploration of the politics of adolescence and young adulthood is very genuine, and French’s investigation into the intense – and sometimes confused – friendships of teenage girls both rings true and serves to propel the narrative ever-forward. Focusing largely on Holly Mackey’s own group of friends and their varied interaction with Chris Harper, as well as their strained and outright hostile relationship to certain other cliques in the school, The Secret Place tells a story both of the murder of a young boy and of the levels of intimacy and dedication present in the close friendships of teenage girls. While French’s use of teen slang may occasionally seem overwrought, the emotions and actions of the majority of the characters feel very real and relatable.

But this, of course, in a way comes second to the action of the novel, which is Moran and Conway’s day-long investigation of the novel. French tells the story in alternating first-person narrative in Moran’s voice, covering the day of the investigation, and in flashbacks of the previous year’s events that led to Harper’s murder, and the back and forth never feels tedious. The novel moves quickly — too quickly– and the eventual reveal is at once shocking and understandable.

The Secret Place is a novel that should be read, and should encourage readers to move on to all of French’s novels.