The Skeletons in God’s Closet: The Mercy of Hell, the Surprise of Judgment, the Hope of Holy War by Joshua Ryan Butler 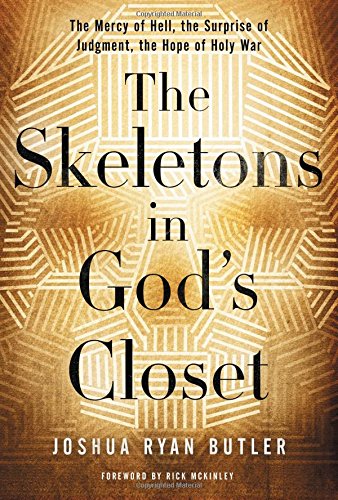 Pastor Joshua Ryan Butler maintains in his book, The Skeletons in God’s Closet, that the popular conception of God as the master that maintains heaven up in the sky, us down here, and Hell burning underneath, is a distortion and might lead some to think that God might have some issues that diminish his character and stature. Properly understood, however, these negative aspects disappear and God emerges once again a benevolent and loving essence.

Start with the geometry of the creation. Rather than the vertical orientation, Heaven will be on Earth and Hell is not under, but outside. We who are found wanting at judgment are not imprisoned in Hell, but rather we have chosen Hell and deliberately turn away from God’s holy city and remain outside the gates. Judgment, rather than being an individual thing, is a judgment of empires. Like Babylon, all the nations will be judged and the people within will somehow be sorted out in the process.

Holy war, as envisioned by the author, is not one nation or people against another, but God doing the work with fire and brimstone, not tanks and mortars. Once again, as near as this reviewer can figure, people will not be tortured in the process, or eternally either, but perhaps only momentarily as the sorting occurs. This is a recurring theme. Torture is not a feature of the New Creation.

Those are Butler’s main concepts. The fine print is this: the Bible contains language that is, shall we say, inflammatory, and encourages negative images. This language is now to be understood as just period, testosterone-fueled trash talk gone wild and shouldn’t be taken literally. Anything else that detracts from God’s godliness is summarily rejected or diminished by redefining or re-explaining troublesome words and passages. The author’s ideas are novel and put forward in a relentlessly positive manner. Is it persuasive? It really doesn’t matter. No one will know until, or if, we are resurrected on that day.