The Spirit and the Skull 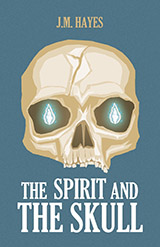 A Colorful Story Full of Imagery and Suspense

A passionate Native American story, The Spirit and the Skull begins with Raven, a Spirit Man who returns to his people to lead them to a new land, only to discover an unthinkable murder has recently occurred. Filled with ancient terms and vocabulary, this story turns the sin of murder into something so heinous and wrong, and solving it becomes crucial to restore the delicate balance, allowing the world to go on for this group of people. The belief that life is full of balance is one which is told throughout ages using ideas of justice, karma, ying and yang, and so on. In this story the world seems to teeter so close to the edge of destruction based on this crime alone. Griping the reader is the desperate hope that Raven will be given the chance to love, which has its own culture complexities and begs to be given its own justice until the fear that the young woman he has been drawn to for so long could be the one who betrayed the whole tribe. Hope that it isn’t draws a picture which fills the imagination all the way throughout. A colorful story full of imagery and suspense makes The Spirit and the Skull well worth reading.