The Tale of Rufus by Peter Fellowes 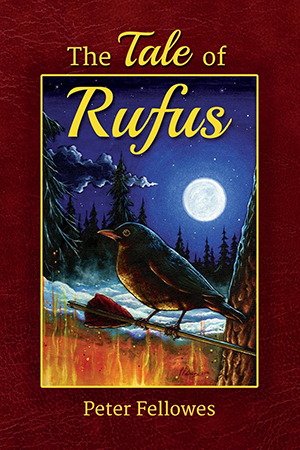 In The Tale of Rufus, written by first time novelist Peter Fellowes, the story follows the journey of Rufus and Milo, two young birds fleeing the Colony they have both served since they were chicks. It is quickly revealed that Rufus and Milo are no ordinary birds; they have a secret that makes them a threat, hence their need to flee. As the reader learns more of their hidden abilities, the tale unfolds of how the birds cross paths with dreaded Hu-mans, dangerous buzzards hot on their trail, and a cast of delightful feathered characters. Together they all learn that sometimes “even a single twig can unsettle the structure of the entire nest.”

The Tale of Rufus has an appealing atmosphere that will bring back childhood memories of Mrs. Frisby and the Rats of NIMH and the Redwall series – animals joining together to fight off humungous forces of evil. That being said, the story reads as if it has bitten off more than it can chew at times. Fellowes attempts to portray a massive battle of good vs. evil, but the actions of the story don’t quite live up to the feeling he tries to convey. While description and detail can set up a scene beautifully, Fellowes’ paragraphs are often far too bulky and the reader may feel as if they have to drag themselves through a few parts of the book to get back to the more meaty action. However, for a first book, Fellowes still manages to pull off a decent story. The central characters are charming and likable – especially little Milo, the Wren – and the reader will certainly find themselves rooting for the protagonists as the story progresses. Though a bit of a slow read at times, The Tale of Rufus is enticing enough to keep readers going until the last page.