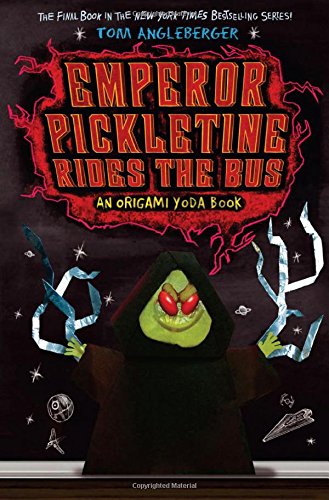 Emperor Pickletine Rides The Bus is the final installment in the six book Origami Yoda series by Tom Angleberger. Chock full of Star Wars references and puns, this 200 plus page kid’s book travels at lightspeed through an adventurous school field trip.

Written and narrated as a detailed collection of case files, the numerous chapters or entries are penned by a variety of characters from the book. Tommy and Kellen are the most frequent contributors followed by Mike, Sara, Amy, Murky, Remi, Cassie, Lance, Lisa, and Quavondo.

The book title speaks directly to the plot, which is a 7th grade fieldtrip to Washington DC involving students, chaperones and origami characters, including Emperor Pickletine. Lest you think little transpires during a grade school trip, rest assured that the pages are peppered with drama, intrigue, mystery and triumph, in addition to countless margin and in page doodles, drawings, charts and speech bubbles.

“Basically, I rode a bus for five hours with seven sugar-rushing boys so that I could pee in a closet, go into a museum I didn’t want to go to, listen to Harvey yak about all the exhibits like he was a tour guide, then get yelled at by Mr. Howell for something I didn’t do…”

Having never read any of the previous Origami Yoda installments it took a few entries to orient myself. Written in a fast paced, and at times manic clip, the story catapults forward with seemingly every possible concern or issue explored and fretted over by the adolescent storytellers. The kids’ problems and worries prove exhausting after only a few chapters, making me wonder how any of us survived the 7th grade.

Whether its seating arrangements, the ability to make origami, navigating the onboard toilet, bringing soda on the bus or trying to stave off boredom, these kids are sure to blow it out of proportion. Considering the book is heavy on the Star Wars puns and overall references readers might be better off if they have at least a basic knowledge of the space saga.

If you have already polished off the other books in the series and are looking to wrap it up with Emperor Pickletine then you will likely be prepared for the style of writing and content, however, if you are new to the series get ready for a unique and wild ride.