Genesis Code: A Thriller of the Near Future by Jamie Metzl 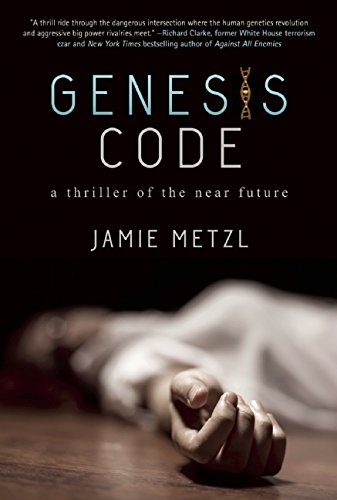 Rich Azadian is a reporter on thin ice at his paper, the Kansas Star. Desperate to make a name for himself and secure his place on the paper, Rich uses a police contact to get in on the ground floor on a story about a murdered young woman. Initially believing that she was killed by an overdose of a designer drug – blue magic – Rich soon finds out that the truth is far more murky and dangerous. He enlists the help of a detective friend, his ex-girlfriend and nurse, Toni and his research assistant Joseph. As they delve into the story they find that more victims meeting the woman’s description have died under mysterious circumstances, and all while pregnant. As Rich works to find the truth, he realizes that he must risk everything in order to save the lives of other women as well as his own.

Genesis Code by author Jamie Metzl presents a world of the future built on concerns of today. China essentially owns the U.S. and has far-reaching influence and sway our laws. Religious politicians are becoming more powerful and able to merge law with their own beliefs and the government tracks people easily. The author builds a wonderful atmosphere of anxiety and paranoia. The main character is reasonably relatable and has a nice character arc throughout the book. Initially he is presented as a man who is just treading water through his life, waiting for his destiny to arrive. As the book progresses he learns what he really wants out of life and goes after it. The supporting characters are well written, if a bit bland, and the pastor with whom Rich squares off with throughout the book has an interesting snake charmer quality. The plot is stellar and well paced. While it has some twists and turns, they all make sense. The science on the DNA enhancement research is fascinating and one of the best parts of the book.

The hiccup in the book comes when Rich and Toni try to save one of the other women, Maya. From the start, Rich treats Maya like a child instead of the intelligent adult woman that she is and is subsequently perplexed that she responds by acting like a child. These interactions take away from the enjoyment of the book and take the reader out of the moment. His apparent belief that protecting someone means to dictate what he or she will do and takeng away his or her choices is also odd and causes the reader to lose respect for him. His decision to “act like an adult” and badger her into leaving her home in the middle of the night with two strangers was also very off-putting.

Overall this is a very well-written sci-fi book with enough realism in it to be frightening to readers. Most of the book is entertaining and interesting to read. Fans of sci-fi and mystery will definitely enjoy Genesis Code.