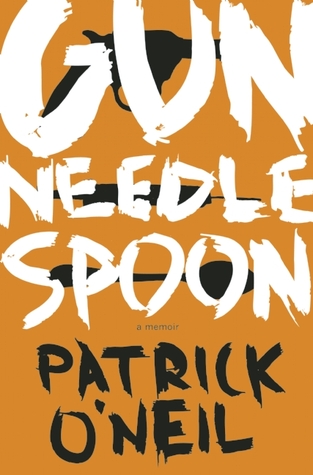 This memoir is a gritty day–in–the–life narrative, opening with the author’s dramatic arrest at home with his girlfriend of the moment, both of them strung out on heroin, and then jumping back in time thirty-one years to relate the events that culminate in his undoing.

Each successive chapter is a cut-scene from Patrick’s history, moving progressively forward, a skipping stone across time, each successive hop shorter than the one before, creating a crescendo effect as events escalate to return us to the opening scene. This staccato story telling creates tension that mounts with each chapter and keeps the reader engaged. This jump-cut approach also creates a void, a noticeable lack of attention to Patrick’s formative years, which proves problematic later on. But we’ll get to that.

“Them who are meant to hang won’t drown.”

The language feels authentic and the story manages to remain compelling from the opening flashback describing his near drowning as a teenager, to his final heist gone bad and the subsequent visit by the neighborhood SWAT team. The story is a page-turner, surprising when you consider Patrick spent much of his time in a heroin stupor. Shoot up, check out, withdraw, get the chills, puke, shit, bum a cigarette, steal something, get cash, get high again. Allowing for different companions and different cities, Patrick’s life patterns remained essentially the same throughout his career as a junkie. It should have made for a very repetitious and boring read but instead it offers an eyewitness account from the sidelines of the punk rock scene through the lens of a long-time heroin addict. Rare turf. Oddly Interesting.

The narrative style brings to mind the drug addled antics manifest in Fear and Loathing in Las Vegas, with one key difference. Raoul Duke’s behavior in Vegas was abhorrent, but it was directed at the establishment, and unsympathetic inhabitants who were already subjecting themselves to the abuses of that fair city. Hunter S. Thompson was also not writing fact, he was writing satire. By contrast, Patrick recounts his history robbing local independent businesses and sometimes even his own neighbors, at gunpoint. These are innocents, and highly sympathetic. And here is where the difficulty of not knowing Patrick’s past comes in. Because there is no clear event that seems to mark the genesis of Patrick’s path to heroin use, we can never truly be sympathetic to the “why” of his actions. He drops hints about an uncaring father, but leaves few breadcrumbs to mark the path from bored American middle-class boyhood to middle-aged, sociopathic pariah. As a result, it is difficult to develop any sense of empathy for him as the reader follows his perpetual downward spiraling of fortunes. You could be excused for feeling good when he is finally caught, when you consider all the innocent people he harmed.

Can a story be carried with an unknowable protagonist without clear motivation? Humburt Humburt of Lolita fame wasn’t a very likeable man, but Nabokov spent a lot of time explaining what compelled his main character’s repugnant behavior. By contrast, O’Neil shares his version of the naked truth with few apologies and no explanation for how he embarked on his path of disrepute. Ultimately, there is no message in this book, no lesson learned, beyond the obvious “Don’t Ride the Tiger.” It’s a good read, a heck of a trip, but when it’s all over you may find yourself emotionally flat, licking your lips, and feeling vaguely in need of something more.