Into the Black: The Inside Story of Metallica (1991-2014) by Paul Brannigan and Ian Winwood 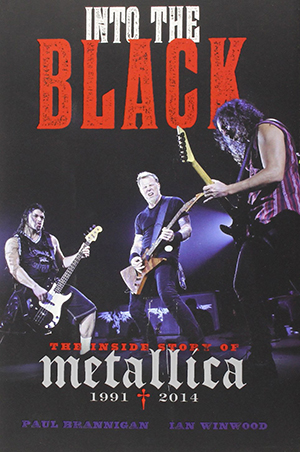 If you’re any kind of fan of Metallica, then you must read Into the Black: The Story of Metallica (1991-2014) to understand the world of this mega-hit rock band after it celebrated its 10th anniversary as a band. The behind the scenes revelations about Napster, the stories behind the Rolling Stone covers and articles, and how ‘I Disappear’ landed them a song in a movie and getting to see the film before the rest of us. Lallapalooza was just the beginning of the huge success Metallica helped build. The empire they have become is one that created rivalries between some of the music industries biggest names. This group of men knows how to rock, but also has some keen business sense helped by the desire to be unique, stand on their own and not be like anyone else. This is a book which has no disguises – it’s genuinely raw language may not be what you want your youngster reading, but the truth behind the words gains respect for the passion behind it even if you aren’t their biggest fan. The sound of Metallica has changed through this band’s evolution and it has faced challenges to keep old fans with new music, play old songs to keep them around and still appeal to the new fans to hold. How will they do it? That’s a question only Metallica can answer.