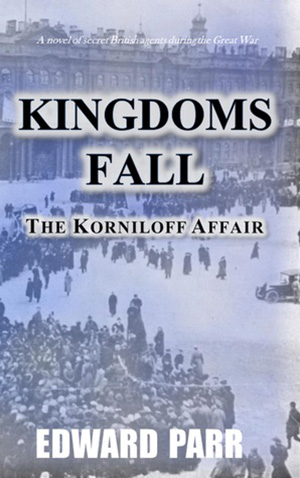 Kingdoms Fall – The Korniloff Affair by Edward Parr is the second historical novel in the Kingdoms Fall series. This book follows the continued adventures of two agents of His Majesty’s Secret Intelligence Service: Wilkins and Gresham. Wilkins and Gresham make a dynamic team, as they traipse across Europe during World War One. Their job is to aid the allies in anyway they can, often their adventures taking them to the epicenter of many major events: the Irish revolution, the Battle of the Somme, Roumania before it entered the war, and to Russia with the upheaval of the Bolsheviks. As they move through Europe we get to meet some incredible historical figures: General Haig, Benito Mussolini, the Queen of Roumania, Lawrence of Arabia, and in Russia the cast includes figures like Lenin, Alexander Kerensky, and Korniloff.

Edward Parr does a wonderful job of blending fact and fiction, to the point where someone not intimately familiar with the events of World War One, would have a hard time picking out what actually happened and what was invented by the author. Parr’s invention of Wilkins and Gresham gives the reader a more intimate experience of some of the larger events in history, as Parr weaves a very tangled and interesting web of events that span from America to Britain, Germany to Ireland, Roumania to the outcome of the war, Germany to Russia, and all the way down to Arabia. The main take away from this novel is a clear understanding of just how global the war was.

While Parr opens with the assassination of Rasputin, it can take a little while to get into the flow of the book. Parr’s writing style is a little clinical, or rather historical, and can feel a little dry, but that doesn’t inhibit the reader’s interest for long. Even with a more removed style of writing, it is easy to get swept up in the intrigues and machinations of the two main characters. The only awkward part of Parr’s writing is his introduction of Wilkin’s love interest – a young American nurse working for the Red Cross in Venice. She plays an important roll, but it feels like not enough time was spent on the scenes where she plays a key part – as if perhaps Parr was unsure as to how to navigate some of her interactions. Her character could stand to be flushed out a little more, but other than that the novel will keep anyone who is even slightly interested in that period of history turning the page.