Let Me Be Frank With You by Richard Ford 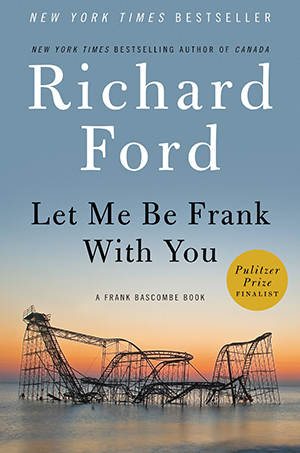 As someone who has been with a character since the beginning, I was in search of closure. Sometimes when reading the last book in any series, a variety of emotions are bound to come up, from sadness to happiness, however hard it is to read the last story. With this particular one, I have seen him become a husband, a writer, a realtor, and lastly, someone who is trying to come to terms where he is in his life and looking back. Trying to be satisfied of what he will be leaving behind. And closure is what I was rewarded with, thanks to Richard Ford. And I am speaking of one Frank Bascombe. Frank came into my life when, Ford wrote The Sportswriter, back in 1986. From then on we reconnected again in Independence Day, in 1995 and once again in The Lay of the Land, in 2006; and now we meet him again in Let Me Be Frank With You, who is now looking towards the known and the unknown.

In Frank, we see how Frank deals with the aftermath of Hurricane Sandy, which hit his old house situated in a fictional town in New Jersey. As one who has read all the Frank novels, I have noticed a common theme – pairing up a major holiday – from the fourth of July to thanksgiving with a passive participant. Frank is a man who likes to sit back and relax, almost afraid to rock the boat as a result of losing his 9-year-old son, Ralph (The Sportswriter,) and feels that if he were to be an active one, more loss could come his way. At this point in his life, Frank feels like each day is a blessing with all the loss and heartache around him and feels that he has had his share.

With Frank, Ford’s ‘everyman,’ one instantly thinks of Harry Angstrom – the four novellas, the lifestyle – the passivity – the not wanting any more harm to come to their life. Yes, Frank found love without guilt and chose to not stay in a marriage to atone for past transgressions, even though they both lost their youngest children. However, with Harry, he keeps throwing it in Janice’s face. Not to fear for Janice, she’s able to retaliate and be Harry’s equal.

Ford has structured the book into four narratives or stories where there is pain to be felt or pain to be witnessed. They range from an old realtor transaction to a horrible accident to his ex-wife, Ann, who is battling Parkinson’s to a death that hits home for Frank. Each story stands on its own merit, but as a whole, brings challenges and demands that will make Frank become an active participant and realize that he can’t just sit back and let life go by, even though it would make him happy. It makes him realize that sometimes life demands more of us.

As one reads this review, they will realize that its more than just a standard review. It’s a goodbye letter to Frank, Sally, and New Jersey, but not to the writing of Richard Ford. This reviewer has read other works by Ford and will be waiting patiently for the next story. If one wants to get lost in a story, let Frank Bascombe and Co, be that story.