Lit Up Inside: Selected Lyrics by Van Morrison 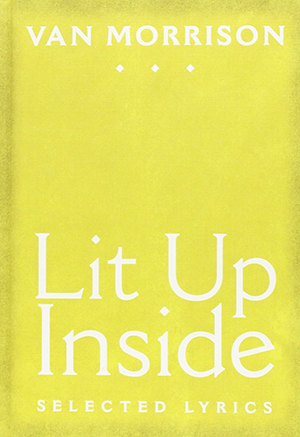 Van Morrison is renowned as a singer, songwriter, and rock artist. None of these descriptors do him justice. Very few rock and roll “poets” would survive artistically if their songs appeared on the printed page without the music or the musical arrangements.

Morrison is an unusual artist, because his work varies from simple statements to elaborate mystical portraits of people, times, places or events. He often references streets in his native Belfast, and childhood experiences listening to Radio Luxembourg. The book contains about a third of the songs that he has recorded, in a career that has spanned forty-nine albums. Much of the work reflects the pull of life in his native Belfast, as opposed to his various sojourns in the United States.

The reader will find many of Morrison’s old favorites, like Gloria, or Brown Eyed Girl, along with his more mystical songs, such as Madame George, as well as numerous love songs. There are references to other musicians, like Jackie Wilson, to poets and mystics., and to the blues music that he heard in his childhood. There are also tales about show business, and religious references in the various song-poems. Once the reader gets over the shock of not hearing the music for these lyrics, or the brilliant arrangements that often accompany this music, a thoughtful and brilliant poet stands for all the world to see.