Miss Anne in Harlem: The White Women of the Black Renaissance by Carla Kaplan 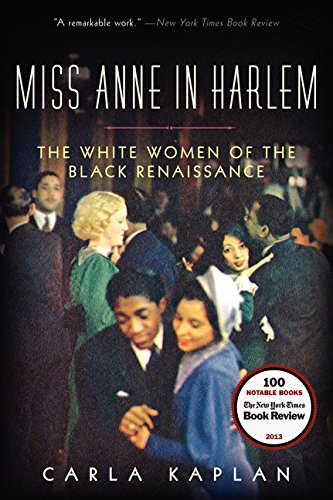 “Few ideas are as riven by contradiction and confusion as American ideas of race,” says distinguished professor Carla Kaplan in her latest non-fiction work Miss Anne in Harlem: The White Women of the Black Renaissance. In light of the recent Ferguson and Eric Garner tragedies, Kaplan could easily be talking about modern day – and in a sense she is if you recall the famous quote by Santayana: “Those who cannot remember the past are condemned to repeat it.” – but is in fact referring to the white women who rebelled against societal norms to teach, befriend, date, or even marry black people during the 1920s.

“Miss Anne’s situation was so unique that it would have been almost impossible for her not to develop original ideas, such as her simultaneous rejection of racial essentialism and ‘color-blindness.’ Her insistence that race is a constructed idea, but one we cannot afford to ignore, is an important double insight, one that we could stand more of today.”

“Miss Anne” is a slang term for a white woman and is also a collective term for the white women of Harlem during the Jazz Age. The press sensationalized and sexualized Miss Anne as someone untrustworthy by any race. They were seen either as sex adventurers, slightly better than prostitutes, or lunatics. Six biographies, out of the five-dozen Kaplan curated, attempt to show the range and complexities of Miss Anne’s experience and voice. This meticulously researched book should be required reading so that future generations will not be condemned to the repetition of racism and sexism still inherit in today in the United States.