Noodle Magic by Roseanne Greenfield Thong, illustrated by Meilo So 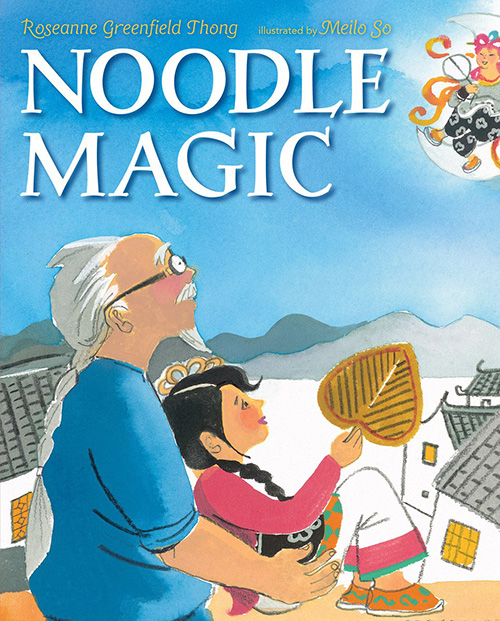 Magic Noodle reads like a Chinese folk story. Mei’s Grandpa Tu makes magical noodles. Grandpa Tu slaps, kneads and stretches the dough to create noodle perfection. The entire town loves his noodles; even the Moon Goddess is impressed with his noodles. Grandpa Tu can do all sorts of things with his noodles like create a jump rope, a kite string and even catch clouds. Mei wishes she were as talented as her grandpa, but he tells her she has her own magic inside her, too. When it is the emperor’s birthday, Grandpa Tu tells Mei it is her turn to make the noodles. She does not believe she can do it because she doesn’t have her grandpa’s magical touch. Grandpa Tu tells Mei to trust in herself. Mei decides to involve the Moon Goddess in her noodle making, and soon the sky is raining noodles.

Magic Noodle teaches children to believe in themselves and to realize there are many different ways to solve a problem. The illustrations are colorful and have a dream-like quality to them. The whimsical story coupled with the real-life problem will create lots of teachable moments between parent and child.