Not Without My Father by Andra Watkins 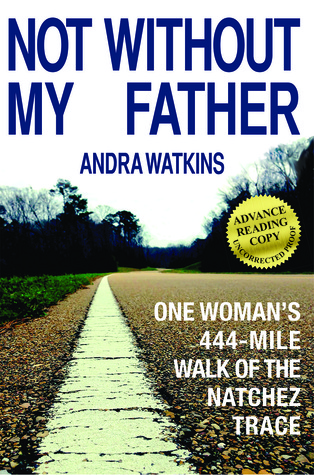 Not Without My Father is an ambitious adventure memoir. It is funny, poignant, agonizing, raunchy, and delightfully “out there.” Andra Watkins shows her mettle throughout the book and is not afraid to show her weakness, her doubt, and her sometimes-dysfunctional relationship with her parents. The story moves skillfully between despair, hope, anger, and elation. This reviewer found it hard to put down once he settled into its rhythm.

Roy Lee Watkins, the father the story refuses to be without, spins his yarns and shares his own despair, doubt, and hope. His constant sparring with his daughter (they both know exactly which buttons to push) offers insight into a universal clash of generations, of fathers and daughters, and by Roy’s telling, fathers and sons, too. This memoir contributes to the literature of American families, especially families of the American South.

This is a writer’s book, which is high praise. Ms. Watkins sums it up simply as she nears the bittersweet end of her journey:

“My body always did things my mind doubted. Growth happened when I overcame my mind.”

It is a story of raw wounds, both physical and emotional, and heartfelt healing. The Watkins family courageously shows the good, the bad, the ugly, and the sublime. You cannot read this book without gaining insights about the American family that will enlighten as you consider some of your very own family dynamics.

Ms. Watkins could have glossed over certain details and hidden some of the profound places her internal journey took her as she trekked the ancient highway we’ve come to know as the Natchez Trace. But she doesn’t hide much of anything. She ties herself to Meriwether Lewis, a main character in her novel To Live Forever, as a traveling companion. What led her to the 444-mile walk was the desire to follow for herself the very path her characters follow in the novel.

Readers will find much to delight in, but they might also squirm under the bright light Watkins’ pen wields. It is an honest and open memoir. By definition, that’s what a memoir is supposed to be.