Queen of Swords by Katee Robert 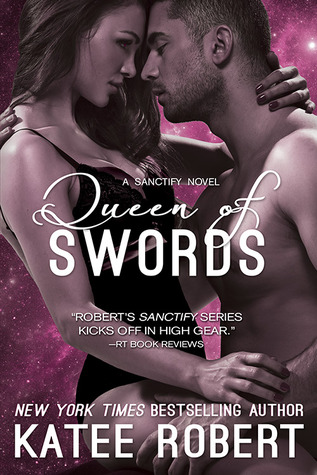 Ophelia Leoni, daughter of a gunrunner and one of the last remaining Diviners, is horrified to receive a summons to marry the Prince of Hansarda, but infuriated to learn that the previous night’s sexy stranger is there to drag her off-planet. To protect her family, and the secret of her heritage, Ophelia complies with Boone’s rigid instructions, not realizing that the man is no mere employee for the Prince. Instead, Boone hopes to use Ophelia against his older brother, with or without her willing participation in the rebellion to come.

Katee Robert’s Queen of Swords is an exciting science fiction romance filled with intrigue, betrayal, and intense chemistry. Robert has constructed a futuristic world populated by a variety of beings, all vividly portrayed by intriguing secondary characters. In particular, the author’s imagination of the Diviners, with their religious dedication to the Lady and their supernatural interpretation of tarot-esque cards, is original and memorable. Though the ending of the novel is rather abrupt, the world building and characters of Queen of Swords are skillfully developed.