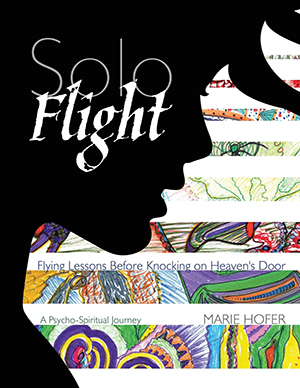 Solo Flight: Flying Lessons Before Knocking on Heaven’s Door, an autobiography by Marie Hofer, delves into the upbringing and inner journey of a woman with a fascinating life. Growing up in a small European town, Marie knew she was destined to become a nun from a young age. The book follows Marie’s strict youth, her Catholic mission in Asia, and her adult work as a nun. It seems like Marie’s life is all figured out, until she suddenly decides a holy life may not be for her anymore. After she travels abroad to America, her journey looks towards the more reflective and spiritual side of things. Can Marie move on from a religious life and embrace a life of academia, sex, and freedom?

Solo Flight has a promising hook, and for the first half of the book it upholds that potential. While it is evident Hofer is no poet laureate, her writing is decent enough to carry the entire story – albeit a bit dry at times. Following her journey from childhood to nun life to adventures in America is interesting enough to keep the readers attention; however, when the book transitions to its second part, that is where the story begins to falter. Hofer makes it clear upon the end of the first part that this was where her story was supposed to end, and although short it would have still been a solid story. The second half of the book begins with Hofer proclaiming her writing of Solo Flight did not feel completed, and thus was compelled to write more. This becomes tedious after a couple chapters of her berating herself for wanting to continue writing when she doubts anyone will find interest in her words. She then spends the rest of the book conducting fake interviews with Jesus, reflecting on her dreams and her childhood, and trying to overcome her shame. While the first half had the story to keep the reader tied to the text, the second half is droll and feels more like the ramblings of a spiritually confused teenager. While the beginning had an uplifting start, it’s fair to say that the second part of Solo Flight forgets the size of its wingspan and falls flat on its face.