The Business of Naming Things by Michael Coffey 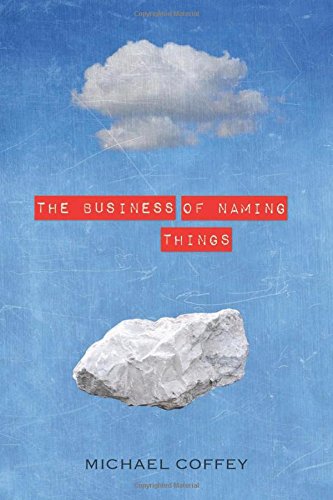 The Business of Naming Things is a collection of short stories and the first work of fiction by Michael Coffey. The stories are loosely threaded together by a common theme of the arbitrariness of names and titles. This theme is best embodied in the title story about William Claimer (the name is no accident) who is quite literally in the business of naming things as a trademarker, creating brand names for merchandise and place names. Claimer travels to upstate New York to a housing community he had named. But the community wants to change its name, to choose its own name. Somehow, Claimer’s son is living in the housing community who is mourning the recent death of 90’s actor River Phoenix. When he wakes the next morning everyone is gone. Other stories include a priest kidnapping a nun after the JFK assassination, a single mother who has a crush on a man she’s never met named Dale, an editor who meets AIDS-stricken writer Harold Brodkey, and a writer watching an Ibsen play.

“In the end, he went to the kitchenette and made a cup of tea. He called his wife but hung up after two rings: he’d drawn a blank on her name.”

Some of these stories were tough to get through. It often felt that they weren’t going anywhere, and the endings often felt haphazard. It was a bit like taking a long bus ride and being dropped off three blocks from your front door.