The Ghosts of Heaven by Marcus Sedgwick 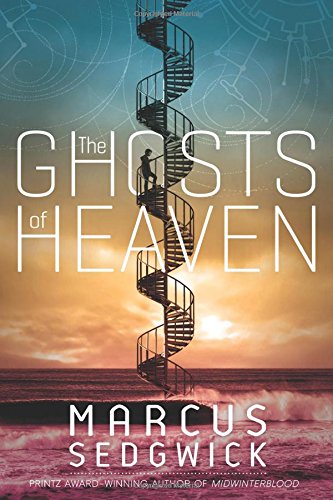 The Ghosts of Heaven is the latest novel from Printz Award winner Marcus Sedgwick and it’s an ambitious one – four self-contained tales (titled “quarters”) connected by spirals, both literal and philosophical. Beginning with a young woman fighting for an identity and her life during prehistoric times and ending with an astronaut safeguarding Earth’s first batch of colonists for another world, Heaven is a rumination on life, human nature, despair, hope, and the universe.

The book opens with a note that the four stories within can be read in any order, and while that’s true, there is a certain grace in following Sedgwick’s narrative coil through time as he underscores and builds upon his theme. He’s most successful in the volume’s two middle stories – one set during the last throes of witch trials in the English countryside, and the other at a Long Island insane asylum in the early twentieth century. Both of these stories deftly swing between horror and beauty, with Sedgwick providing no mercy for his haunted and lonely characters, each of whom must navigate – or be swept up in – a spiral of circumstances beyond their control. The book’s theme seems to resonate most strongly throughout these two stories, while the last quarter – featuring a cosmonaut who may not be what he seems – trips over its own philosophy, even as it presents a frightening mystery.

The spiral is an engine throughout Heaven, a force of inevitability, winding into infinity and providing pattern without concern for justice. Sometimes that spiral is one of hysteria, with neighbors accusing a young woman of being a witch, or it’s the familiar human need to survive, as the girl fighting for magic and her tribe in the book’s opening quarter. While the novel’s theme can cause a few cumbersome and plodding moments, ultimately The Ghosts of Heaven is a gorgeous book that lingers in the subconscious long after the last page.