The Legend of Fantala: The Brio Stone by D. J. Hollis 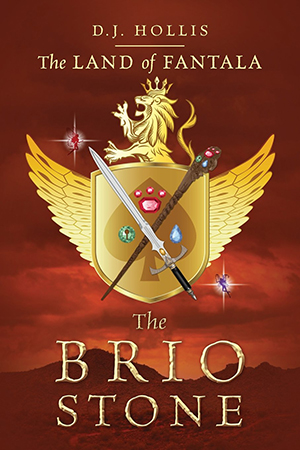 In D.J. Hollis’s The Land of Fantala: The Brio Stone, adolescent king Hypatios Heartshire has his royal work cut out for him when he learns he must track down and collect the missing stones from the Luminaga staff to even have a shot at saving his realm from the resurgence of a centuries-old calamity. Hypatios and Adrastus Kingfisher, the potentially immortal fish-loving fox mage who serves as the royal guardian and mentor (and who knows more about the Heartshire family history than he cares to let on), set out to recover the pieces when they learn that the powerful wizard Kerberrys has broken out of captivity and staged a coup in Skylom…and is also after the stones for the power they grant their wielder. With the help of the sorceress Vale and the healer Elythyia, Hypatios and Adrastus face off against claw beasts, panther guards, sneak thieves and vicious black magic.

The Brio Stone is a fast-paced adventure-filled tale of a young king trying to serve the realm he was handed too early well while navigating his royal responsibilities and desires. Hollis’s characters are likable and well written – Hypatios in particular is a strikingly amiable character – and the Heartshire family history and dalliances create generations of romance and intrigue. The royal party and the their magical companions (versed in the Arts, as they say in Fantala) travel through forests and sandstorms, magical markets and rough prisons, and the conclusion of the story leaves open the possibility of further adventuring through Fantala.

Hollis’s story feels very reminiscent of table-top role playing games and will appeal to young gamers, or to fans of high fantasy. The Brio Stone maintains a light, not-too-violent tone that makes it appealing for all ages, from budding fans to lifelong lovers of the genre looking for a quick read. If you’re looking for an action packed quest through a fantasy locale populated with anthropomorphic animals and magical artifacts, look no further than Fantala.