The Princess in the Opal Mask by Jenny Lundquist 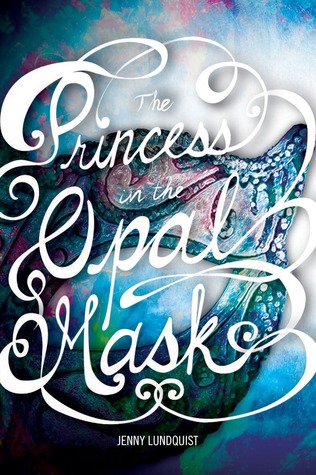 Elara and Wilha have a secret even they don’t know about. They are twins, separated at birth and sent into wildly differing lives. Wilhamina is ushered into the strict world of nobility as the Masked Princess, her face hidden behind a mask so that none should ever know that she has a twin, while Elara, born seconds later, is banished to an unloving family to life out her life as a virtual slave. Eventually, circumstances cause the sisters to meet, and in the tradition of great fairy tales, they trade places, with Elara putting on Wilha’s mask and becoming betrothed to Stefan, the prince of a neighboring country.

It’s a fantastic setup, one whose strengths lie in its simple premise: Cinderella meets Rapunzel, and the two discover they desire what the other has. Unfortunately, author Jenny Lundquist insists on complicating things by embroiling the sisters in a long-standing plot to start a war between Galbadia and Kyrenica. Suddenly, simplicity becomes sidelined. No longer were the sisters just separated at birth, they were separated because of an age old prophecy and a fear that one sister will rise up against the other in a political war. The betrothal to Stefan isn’t just to unite the kingdoms; it may be a plot to assassinate the Masked Princess.

The problem is that these are two very different stories. One is political intrigue, requiring a touch of mystery and the slow discovery of secret plots, with an emphasis on the why of what’s happening. Another is a young adult tale, trying to tell a story about coming of age, the gaining of independence, and navigating the awkward courtships of young love, with an emphasis on the how of what’s happening. This is a difficult dance between genres that many authors have tried to emulate since Rowling’s Harry Potter, but few others have mastered the steps. Nor is it mastered here: the writing rushes in places where it should linger, falters in places where it should step strongly, and doesn’t do full justice to either genre.

For instance, when Wilha discovers her twin kissing Stefan, she feels betrayed. This would be a great moment of tension had it been built up more, but Wilha’s feelings for Stefan are never explored prior to this. Indeed, Wilha never even meets Stefan prior to the switch, leaving this moment not only bland, but also confusing. Similarly, stuck in the points of view of Wilha and Elara, the reader is treated to none of the drama of the brewing war, just the events of it as they revolve around the sisters. Even this had potential, had the sisters been more involved in these plots. Instead, they are absorbed (understandably so) in the story originally promised – the exploration of their new roles in society. Potential remains: there is a wonderful set up for the climax, a masked ball where both girls are supposed to be present and an assassin is supposed to try and kill the Masked Princess. This is discarded almost as quickly as it is introduced, and is replaced instead by a less interesting one-on-one encounter with the villain in a bedroom, where he explains his motives while all but twirling his mustache.

With all of that said, readers won’t dislike their time spent with Opal Mask. The glimpses of what could have been are exciting enough to keep you reading to see what will be. And while what is there ends up not delivering on the promise of its premise, it is a disappointment in comparison to itself, not in comparison to other young adult fantasy. There is hope that the sequel will use what was created here and take it to all of the places it deserves to go.