The Struggle of the Artist

The Struggle of the Artist

It’s raining again in Seattle. It always does at this time of year. I can hear the drip drip drip outside my window and feel an extra bit of cool from the moisture in the air. It makes me put on a hooded sweatshirt, makes me shiver a bit even after doing so, makes my coffee taste even better. It’s already dark by 5:00, and that brings with it the temptation to curl up under a blanket on the couch and watch an old movie, something seen before, maybe something funny like Spaceballs, or something with a bit of heartbreak like The English Patient, or something with a good speech at the end like Last of the Mohicans. I must admit I love the bit where they’re on top of the mountain with the wind blowing and the sun going down, and the guy is going on about all the future change to come but implying that none of that really matters because they were once there. They stood on top of the mountain. They lived their lives, played their part. That’s all anyone can do. That’s all that matters.

It’s the artist who thinks otherwise. 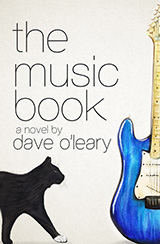 And I sit in my basement tonight listening to the rain, and I think about that scene on the mountain where one Native American passes his knowledge on to two white people, the Native American being the last of his kind. It’s gorgeous. It’s meaningful. It absolves. I can relish in the strength it provides, but I can’t rest easy. I can’t simply die happy and content on a mountain after a life of work and struggle and loss and love. I feel compelled to reach for something more. I feel compelled to leave behind something that is not just biology, something that is purely me and yet external.

That’s the struggle for the artist.

And it isn’t about fame or riches or Amazon sales rankings. It isn’t about being on the radio or in the magazines or seeing strangers on the bus reading my books. It’s simply about leaving something behind and having maybe just that one person years from now pick it up and leaf through it to a certain marked passage, pages that nearly fall from the book for the amount of use they get, and after reading, the person closes the book, holds it close, squeezes it as if to wring more meaning from the glue that binds the pages, and says quietly to himself or herself, “Nice.”

That he will matter.

It’s still raining now. My coffee is empty. My girlfriend is upstairs on the couch curled up under a blanket and watching a movie. Down here in my writing room, I notice a spider in the corner, a daddy longlegs. I consider it briefly and let it live. I stand up and walk over to the bookcase. I run my fingers along the rows of books and stop on one, Charles Bukowski’s You Get So Alone At Times That It Just Makes Sense. I flip though it to a marked passage, read, then flip to another marked passage and read some more. I set it back on the shelf next to a Haruki Murakami book and say to all the books, to all the authors whose lives are here, even to my own two books there on the top shelf, “Nice.”

Then I go upstairs. I open a bottle of red and pour two glasses. I give one to my girlfriend. We toast to the rain, to the warmth of the couch, to us. And I silently toast to the struggle, to that other part of the struggle that is not the artist, that is just a man living and sitting next to a woman and rubbing her legs, to remembering that sometimes it’s good to stop writing, to look around, to feel, to love, to simply be, to be able to look at my future kids and grandkids and give them reassurance of my existence, or to reassure them of their own when years from now when I am gone they pull a book from the shelf and say to a friend, “Check this out. My grandpa wrote it.”

The friend will take it then, “That’s cool.” He’ll flip through the pages, will look at the front and back covers, will ask, “Is it any good?”

Dave O’Leary is a writer and musician living in Seattle. His second novel, The Music Book (Booktrope, November 2014), is a collection of the writings O’Leary has done about Seattle bands for both Northwest Music Scene and the now defunct Seattle Subsonic. It is a fictional narrative wrapped around and within the actual music, a story about live music in Seattle and, more broadly, about the power of music in our lives. A CD of the music experienced in the book will be released by Seattle indie label, Critical Sun Recordings. His first book, Horse Bite (Infinitum), was published in 2011.