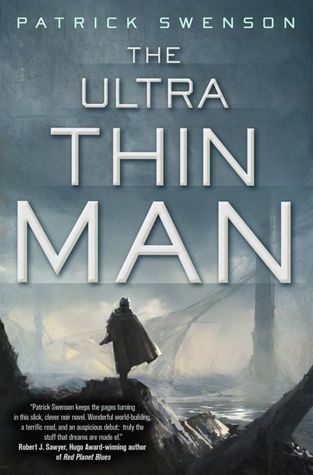 In a future world where new technology can control the weather, and humanity has discovered it’s not alone in the vast reaches of space, a terrorist organization threatens the galactic peach by slamming a moon into the planet of Ribon. Dan Crowell and Alan Brindos, previously private detectives turned contract agents for the NIO (Network Intelligence Organization), are sent to investigate. Separated and alone, Crowell and Brindos quickly realize they are hugely out of their depths and caught in the middle of a vast conspiracy. The two must dodge betrayals and piece together the larger puzzle, before everything comes crashing down.

The premise of The Ultra Thin Man is an engaging one, as is the world in which the story is built, however, so much of the story is left in an ephemeral state that the reader is left somewhat confused. Descriptions of the setting, characters, and technology are so generalized that the entire book feels painted with a large roller brush, leaving very little detail for readers to grab on to. The two main characters, Crowell and Brindos, are never described and their mannerisms were so identical that they often feel like the exact same person. The most obvious way to tell them apart is that the point of view changes from first person (Crowell) to third person (Brindos), but this point of view swapping is so distracting that it can easily remove readers from the story. The aliens are briefly described, but are largely referred to in the story through negatively inclined racial generalities. This makes it very difficult to even begin to empathize with the aliens as they are eternally “other” despite Brindos’ rather unfortunate personal Helk encounter.

The plot is easily the strongest part of the book – the layered politics could have been quite engaging – and yet it is incredibly difficult to care about the stakes involved because of how removed from the action and characters readers become due to the style of writing. The Ultra Thin Man is very much a book that had a great premise, and potential, but the author dropped the ball when it came down to creating the necessary detail required for readers to develop emotional attachments to characters, setting, or plot.