What Flowers Say: And Other Stories by George Sand, Illustrated by Molly Crabapple, Translated by Holly Erskine Hirko 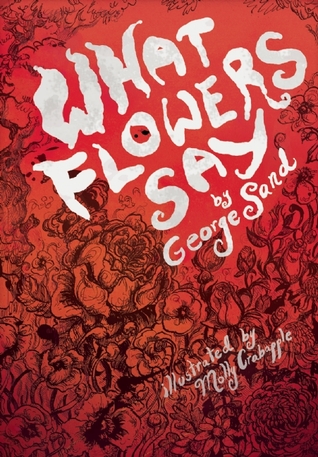 Once upon a time there was a woman born Aurore Dupin in Paris, France in the year 1804. Since male authors were taken more seriously, she published more than 80 plays and novels over the course of her lifetime under the male pseudonym George Sand. The Feminist Press at the City University of New York has just printed a new translation by Holly Erskine Hirko of Sand’s What Flowers Say, a fairy tale collection that she penned for her granddaughters.

“Fairies only reveal themselves to eyes that are wide with wonder and devotion.”

While Molly Crabapple is credited with illustration, only the cover and title pages are covered in flower sketches. There are three short fairy tales and one longer one, broken into ten parts. The fanciful, highly moral plots are charming at best. Sand’s intentions are clear: she wanted to prepare her granddaughters for the world. Through her stories, she wanted to teach them not to be vain and frivolous, but hard working and compassionate. For adults, she reminds that children’s rich imaginations are fruitful gardens when tended rather than trampled. This collection is a nice complement to Anne of Green Gables, Little House on the Prairie, and Little Women.