A Brief History of Walt Disney by Brian J. Robb 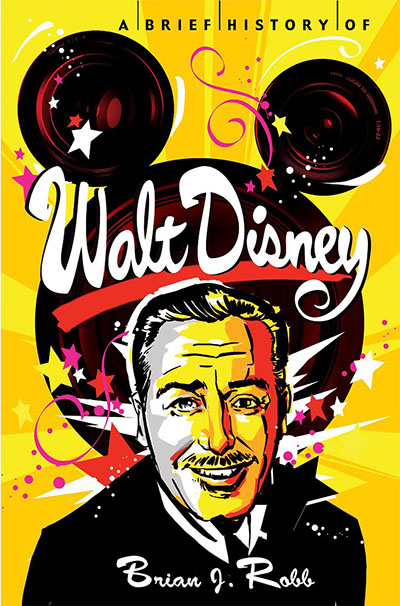 A Brief History of Walt Disney provides exactly what it promotes: a brief history of Walt Disney and the franchise he set out to create. Brian J. Robb follows the life and times of Walter Elias Disney from his humble origins to his rise into stardom. Readers will learn about the struggles Disney and his team faced at the start, the debt and criticism they racked up early on, and all the times the now beloved – and incredibly profitable – Disney franchise almost crumbled. Filled to the brim with production dates, names of unremembered animators, and behind the scenes facts, any Disney-loving aficionado will gobble this book up in the blink of an eye.

As a whole, this book makes for a great read. Although putting strong focus on the rise of Disney’s animated shorts, films, television programs, and eventual theme parks, readers are given plenty of behind the scenes looks at the process of the company’s success. The clashing and reconciliation between Walt and Ub Iwerks is addressed, as well as all the companies that pulled their sponsorship of Disney early on due to believing the studio would not last. A Brief History shines when addressing the process of creating films, especially in the films Snow White, Mary Poppins, and Bambi. It’s interesting to learn how films like Snow White and Mary Poppins were huge successes, whereas Sleeping Beauty and Fantasia were seen as flops at the time of their releases, considering how now the vast majority of the work Walt created during his life is considered classic.

The biggest problem with Robb’s unofficial biography is that it may be brimming with almost too many facts at one time. Any non-Disney readers may feel bogged down with so many dates and names suddenly thrown in their direction, and might even find the book to be a bit too slowly paced. However, Disney fans will relish in the opportunity to be overwhelmed with such knowledge. The other downfall is how the book, while mentioning Walt’s conservative nature, never truly delves into the statements of Walt’s anti-Semitism and bigotry. That being said, A Brief History puts very little focus on Walt’s personal life and outlooks, except for his want of wholesome family values in his media. There is a lot that felt excluded from the book, but then again, as already stated, the book lives up to its title by providing a brief, yet entertaining, history.