After the People Lights Have Gone Off by Stephen Graham Jones 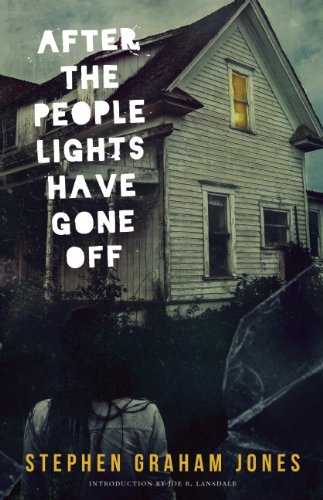 After The People Lights Have Gone Off is a compilation of short horror stories written by Stephen Graham Jones. The stories range from supernatural horror to the horror of the every day mundane; including a supernatural being who haunts a movie theater and the difficulty of a serious injury in a spouse.

After has sparse language and some of the stories are pretty short – leaving it to the reader to try and read between the lines. Not all of the stories are entirely painted for the reader, and it leaves some pieces of the story up for interpretation. Fans of horror in its compacted form will like these stories, as some of them are reminiscent of Stephen King’s short horror compilations. The strongest story in the book has the same name as the collection; and it’s about the aftermath of a wife falling from a loft and breaking her back. It’s in this story where we find most of Jones’ strong points, the succinct language and the author directing the reader to interpret as they will. It’s a re-evaluation of marriage after something tragic happens, and it’s a spooky tale of the changes humans go through when faced with the horror of the every day. Some of the other stories are not as strong as After The People Lights Have Gone Off, but overall the book is certainly worth reading for fans of the horror genre.