Confessions of a D.C. Madam: The Politics of Sex, Lies, and Blackmail by Henry W. Vinson 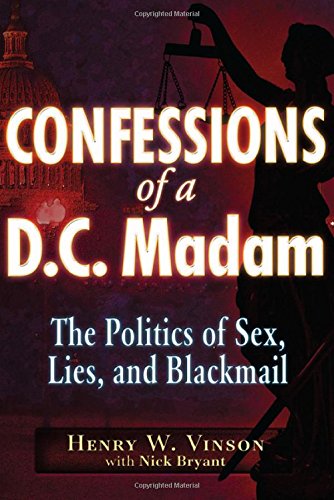 It has become an accepted fact that politicians are dirty. They lie, cheat, steal, and are above the law. Prostitutes are part of an underground part of this society, which America turns away from. There isn’t much to be done to stop it, as paying for sex existed hand in hand with the power dynamic of governing people and society. Confessions of a D.C. Madam: The Politics of Sex, Lies, and Blackmail is a scary eye-opener of how naive American society is to this world. The mistreatment of men and women who provide a service in such high demand is so far beyond the definition of wrong, it leaves one speechless. This is a highly offensive book in the nature of what truth it lays out. The hard and cruel life of Henry Vinson is described in detail. From his creation by a man none other then his mother’s husband, creating a tense, alcoholic and abusive household, and the difficult life of those he grows up around in a mining town. Henry finds his first solace while in college, studying to work in a Mortuary. After returning to his hometown, becoming the County Coroner, he continues to be the target of sexual bigotry and targeted hate for anything he does or attempts to do. Once his escort business begins, it takes off and becomes highly sought after by politicians, businessmen and those in power. Having connections means having secrets, and the illusion of power with the government quickly puts a twist to shut him down and seal him from ever attempting to share the truth. Against their wishes, this book tells so much that it will leave you feeling uneasy about the view you had of the world before you started reading, and what you now know.