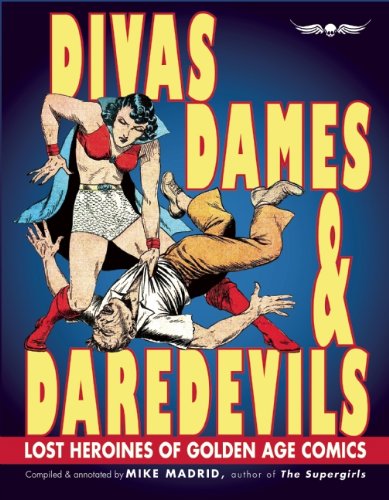 When people think of women and comics they generally think of Wonder Women or Lois Lane, two of the most iconic roles in comics. What people do not know is that there was a time when there were more women in comics, and that they played a wide variety of roles that we would not recognize in modern day comics. These were the divas, dames, and daredevils of the Golden Age of comics, which happened around the 1940s. These women appeared in a wide variety of stories, ranging from sleuths, women at war, warriors, queens and more. It was a heady time for comic books, since they appeared differently than now; they were more anthologies with several individual stories per a issue since the medium was so young publishers did not know what direction the market was going to go. Unfortunately these women did not last long, generally by the late 1940s and early 1950s most of them were gone and the few ones left were changed radically because of the changing political climate.