Inventing Freedom: How the English-Speaking Peoples Made the Modern World by Daniel Hannan 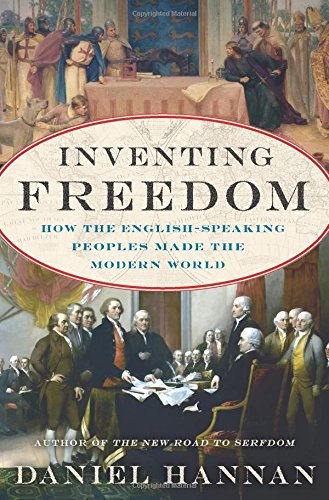 The author traces the history of freedom as a phenomenon of the English-speaking world. From the early days of the Magna Carta, he traces the growth of democratic thought and law as a phenomenon that began in England, and spread through the English colonial possessions of Canada, Australia, India and the United States. This is all interesting, but Hannan has a tendency to favor only the historical events that justify his thesis: that the English-speaking world is responsible for most of the positive developments in the world. As the author sees it, these include not only the political aspects of democracy, but also the rise of economic prosperity and the growth of the industrial world.

Although there is much praise of America’s adaptation of earlier (pre revolutionary war) ideals, there is no real discussion of slavery, and how so much of America’s prosperity was built on the backs of slaves and immigrants. Nor is there a single mention of the phenomenon of indentured servants, English citizens who came to America as sort of temporary slaves with contracts that had to be worked out before they became free. Similarly the caste system of India, and the position of women in the culture are never mentioned.

Despite the fact that the book was originally published in 2013, the author’s glorification of American middle class life ignores the decline of that class in the last six or seven years. Since both Republicans and Democrats decry this decline, it is hardly arguable. The author continues on his merry way, praising the free enterprise system and critiquing government abuses of power. Another interesting omission in the book is any examination of the Scandinavian countries or economies, which have been thriving for years under a mixture of free enterprise and governmental intervention.