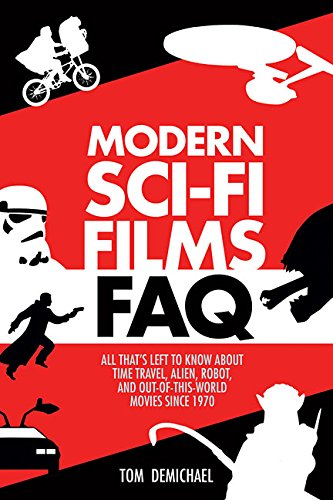 Modern Sci-Fi Films FAQ from sci-fi movie veteran and insider Tom DeMichael is a valuable book for those who seek to be in the know about science fiction films. It also would not hurt for those who focus on just the book versions to know what has transpired on the big screen since 2001: A Space Odyssey. The book is more than just a reference book and breaks things down into subgenre categories to tell stories. There are chapters about Time Travel, Robots, Encounters with Extraterrestrial Good and Bad, and some of the folks who work behind the scenes. There is great attention given here to special effects, $, art, and icons. This book is likely to put the reader ahead of the learning curve for a genre that has become a staple of the film industry.

“The invaders often regard us as one big day-care center in need of a diaper change.”

The descriptions of the films are in detail and can be a bit hard to follow, but they are accompanied by interesting trivia and background information. The film writers are not really the stars here unless they are also the directors or producers. The author also seems to like Star Wars better than Star Trek, which filled a lot more literary spaces.