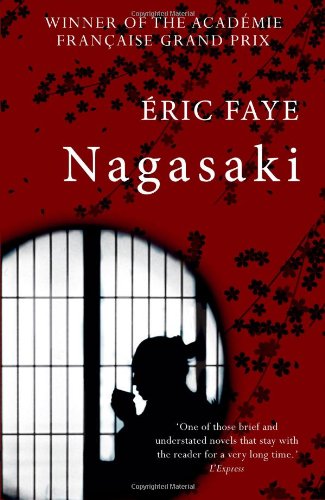 Nagasaki, written by Éric Faye and translated by Emily Boyce, is a short novella based on real-life events in Nagasaki, Japan. A meteorologist, Shimura Kobo, lives a solitary life; repeating routine day after day, while wishing he wasn’t so alone. Suddenly, Shimura begins to notice something: food is slowly disappearing from his refrigerator. Is it an intruder? A ghost? Or maybe just his imagination? Faye’s tale will keep readers captivated throughout the enticing reveal and well into the climax of the story.

Nagasaki is one of those books wherein sometimes the reader will feel the need to backtrack and reread a paragraph or a sentence, because the writing is so delectably strong and the story so mystifyingly good that they will not want to miss a single syllable. Every description is woven in seamlessly, making the reader feel as if they are, in fact, standing in Shimura’s apartment as a treasured guest. The narration from both central characters introduced is clear and gives a distinct view of what kind of people they are; allowing the readers to truly know them through the contents of their minds and actions. The novella is just over one hundred pages, and with a tale this intriguing it is easy for readers to get swept up and read the entire book in one go. In the hands of a more mediocre writer, this story would not only have been shorter and unfulfilling, but less fascinating as a whole. Faye takes a simple news story and crafts it into something beautiful; a reflection of the morbidity of loneliness and the constant need for companionship.

The biggest problem with Nagasaki would be the ending. The novella reaches its end rather abruptly, leaving an unresolved feeling in the pit of the reader’s stomach. While compelling till the last page, its sudden end leaves a want to know more. Perhaps it is because the story is based on events that actually took place and the author wanted to stay as faithful to what happened, but the story would have greatly benefited had Faye drafted a handful of paragraphs to wrap up his plot on an undeniably stronger note.

With the exception of the ending, Nagasaki is a strong short story throughout and a delight to any reader who longs to know the mystery of Shimura’s disappearing food.