The Celtic Myths: A Guide to the Ancient Gods and Legends by Miranda Aldhouse-Green 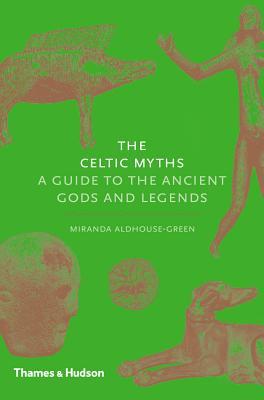 Bust out your feather duster, because after you read The Celtic Myths, you are going to want to clean off those old mythology books you have neglected for all those years! In The Celtic Myths: A Guide to the Ancient Gods and Legends, Miranda Aldhouse-Green provides an excellent introduction to Celtic lore, primarily in regards to Irish and Welsh traditions as they have been passed to us in the modern age through their two most notable works: The Tain and The Mabinogion. By recounting the rich and colorful stories found within these and other Celtic mythological works, Aldhouse-Green provides an engaging platform to discuss the literary motifs of the Celts with an eye to uncovering the nature of the enigmatic Celtic culture. But this task is fraught with peril, for much of what the modern world has inherited of the Celts shows a clear Christian influence that may taint and transform ancient Celtic tradition. Aldhouse-Green navigates through this precarious terrain exceptionally well and parses through these influences with the aid of a plethora of informative, entertaining, and illustrated sidebars that provide historical and archeological context to the myths and legends addressed, allowing her audience to delve deeper into the vein of Celtic tradition.

The Celtic Myths opens with an account of the earliest oral traditions of these ancient legends, preparing the reader for the motifs they will encounter due to the nature of oral tradition itself as well as the aetiological role myths take in ancient cultures. Aldhouse-Green furthers her examination of the Celtic mythic tradition by recounting the historical progression of this lore from the spoken word to the written word, taking special care to note the influence that the introduction of Christianity and its values may have had on Celtic culture and the transcription of their pagan myths. Next, the author introduces the reader to the pantheon of divine characters that frequent these mythic tales, from Morrigan (Irish goddess of war and death) to Pwyll (Welsh divine lord of Llys Arberth). The following chapter addresses the great heroes who frequent these tales, most notably Cu Chulainn who boasts a host of heroic deeds until his tragic death by a divinely forged spear. Here Aldhouse-Green returns to prevalent traits of the Celtic mythic tradition, from the importance of plants, animals, and the land in their culture and lore, to their fascination with the supernatural and the underworld.

Overall, the reader comes away with a brief, but significant, look at Celtic myth – a world in which spirits inhabit the plants and the animals, in which the supernatural is held in awe and fear, in which strange creatures roam and curses (gessa) foretell tragedy at every turn. To those intimately familiar with The Tain and The Mabinogion, Aldhouse-Green’s book may reveal little in regards to Celtic myths and legends, which she often presents in a truncated fashion, but her book’s focus lies elsewhere. It seems that The Celtic Myths primarily concentrates on illuminating the predominant motifs found within these ancient myths and legends (while being mindful of later Christian influences) so that, when the novice comes to explore further these wonderful stories, he or she will come conversant in the nature of the tradition and more fully able to appreciate the intricate and fascinating tapestry that is Celtic mythology.