The Greatest Knight: The Remarkable Life of William Marshal, the Power Behind Five English Thrones by Thomas Asbridge 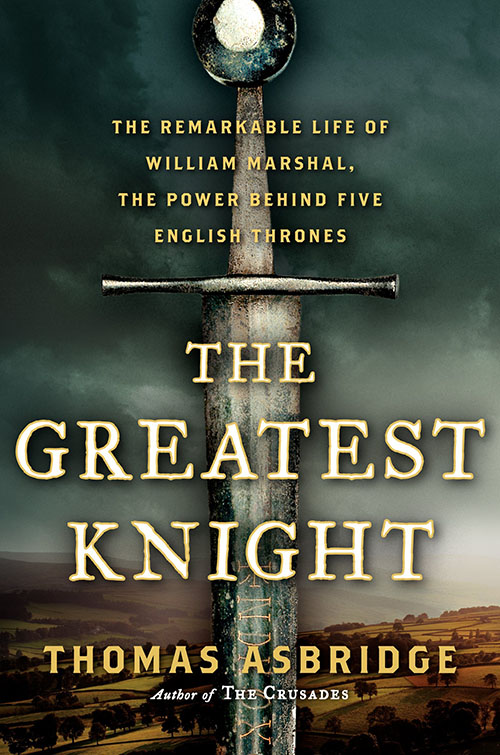 Thomas Asbridge shares the fascinating story of William Marshal: a real-life medieval hero well known in his day but lost to obscurity soon after his death in 1219. The discovery in 1861of a Norman-French biography written in the mid-1220s (and its subsequent translation in 1881by French scholar Paul Meyer) re-introduced the world to this archetypal knight, a man who staunchly served five English kings during the “dark age” of Europe.

Marshal’s story would be compelling enough based simply on the sheer span of his life. He was seventy-two when he died, at a time when the average life expectancy was half that number and the world was full of constant hazards. William saw his fortunes swing from good to bad to good again throughout his life. In his boyhood, a rejection by his father nearly resulted in him hanging as a hostage at age five. This ultimately led, instead, to his knighthood, and to fighting on the side of more than one losing king. But his unquestioning loyalty to a succession of kings and his sheer martial prowess kept him alive throughout this tumultuous history, and invited comparisons at the time to Lancelot of Arthurian legend.

What makes this presentation of Marshal’s story exceptional is the sheer volume of information that is available. William’s original biographer and subsequent scholars provide us with a detailed understanding of day-to-day life in medieval England and France – a time that modern readers typically associate with Robin Hood and his Merry Men. But where Robin Hood is more legend than history, William Marshall is the opposite. He served the actual King John. He fought against, and un-horsed, the actual Richard the Lion Hearted – then later fought at his side to restore the English claims to modern day England and western France. He traveled to Jerusalem to fulfill a commitment made to Young King Henry III on his deathbed. While there, William met and befriended the Knights Templar and later joined their order on his own deathbed. He was chief negotiator of the original Magna Carta in 1215, and the slightly reworked versions in both 1216 and 1217, collectively regarded by many as the original “Bill of Human Rights.” In short, William was a man who moved among legends, and Thomas Asbridge compellingly relates much of the history of the time period using William’s story as conduit.

History enthusiasts will lament that fact that only three maps are provided, one of medieval England and two of Medieval France, none with enough detail to properly follow the described movements of hundreds of knights on horseback and thousands of troops on foot. But this is a small distraction. This is a rare kind of history book: one that knows how to speak to a lay reader, and also has a strong enough story that it easily fills its 464 pages. There are enough epic journeys here to satisfy Tolkien lovers, enough backhanded politics to engage fans looking for the next Game of Thrones book, and enough excitement for any reader to believe that true history is the greatest story of all.