The Little World of Liz Climo by Liz Climo 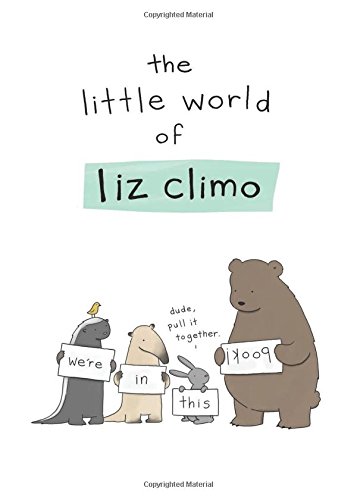 Earning three stars, The Little World of Liz Climo would probably be considered a coffee table book of sorts, given that it is a picture book. In this book, Liz Climo put together a collection of her cartoon characters in various situations with each other accompanied by clever and/or funny comments. The Little World of Liz Climo can be read in full in under fifteen minutes, which is why some could consider this to be book meant to be on a coffee table, and flipped through casually. Although this book is clearly not a novel with plot points and character development, it is easy to understand its appeal and jokes. The only shortcoming of this book is that the comments that accompany the drawings are not as charming as they were seemingly intended to be. All in all, Liz Climo did a fine job of illustrating this book, her bear, badger, and bunny characters are worth browsing