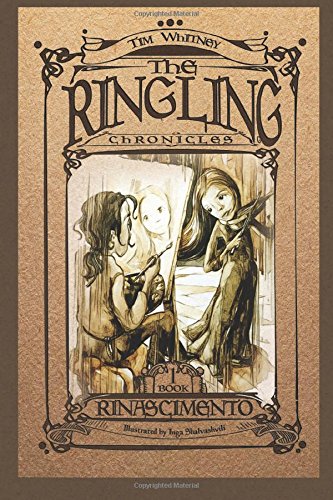 Mico has never been a typical girl. Raised on the grounds of the John Ringling-founded museum, Ca’d’Zan, she spends her time listening to oldies music, watching classic TV comedies, and drawing. Inexplicably drawn to the Renaissance period in particular, Mico spends hours at the museum’s art gallery studying the paintings of that period. One day while in the gallery, she meets a mysterious young man, Giorgio, who leaves her with an envelope, then disappears. In the letter she discovers a journal from John Ringling himself dated 1418—well before his date of birth! There is also a letter from Giorgio begging Mico for help in order to help John Ringling get back to his own time. Mico is initially highly skeptical of the journal, but inadvertently experiences time travel herself after finding the medallions. Soon she is off to fifteenth-century Florence to help save John Ringling.

The Ringling Chronicles Book One: Rinascimento is the first book in a series by author Tim Whitney. The premise is an intriguing one, in part because it focuses on an interesting time period and on the building of the great dome of the Florence Cathedral. Throughout the book, the author gives information about its history, weaving it in with Mico’s story and quest to save John Ringling. In order to save John, Mico must help the dome’s builder, Filippo Brunelleschi, figure out a way to create the dome without having it collapse. Additionally, she must do so without influencing events that will change the future. This creates a nice puzzle for Mico and she handles it well.

Mico herself is a great heroine. In addition to the pleasure of having a strong, unusual, and competent young girl as the main character, the author has infused her with enough quirkiness to make her instantly endearing to the reader. Giorgio is always great as a supporting character—kind, tenderhearted, and caring. The artists she encounters are less interesting, but aid with the story (mostly they seem like petulant children). The book is not one that immediately draws the reader in, but rather becomes more interesting as the plot unfolds. The end is a satisfying one and the epilogue nicely paves the way for book two in the series. Overall, older children will enjoy reading about Mico and her adventures during the Renaissance. The Ringling Chronicles are off to a good start.