The Rocky Horror Treasury: A Tribute to the Ultimate Cult Classic Musical by Sal Piro, and Larry Viezel 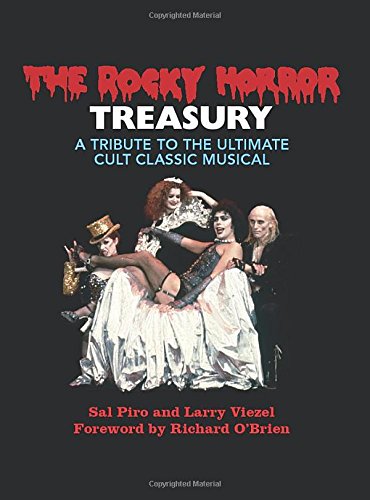 It’s likely that only the most die-hard Rocky Horror fans are well-versed in the humble beginnings of Richard O’Brien’s musical, The Rocky Horror Show, that premiered in June 1973 to an audience of sixty-three at London’s Royal Court Theatre Upstairs. Now, in 2015, as the film adaptation celebrates its fortieth anniversary, The Rocky Horror Treasury: A Tribute to the Ultimate Cult Classic Musical, offers a behind-the-scenes journey into the story of how one play spawned an international community of fans, participants, and shadow-casters – who are still attending midnight screenings of The Rocky Horror Picture Show across the world today.

With “Did You Know?” features throughout that offer fun tidbits most wouldn’t be privy to, The Rocky Horror Treasury is more than a history of one pop-culture phenomenon. Co-authored by Sal Piro, president of the Official Rocky Horror Picture Show Fan Club for more than 35 years, the book also features interactive musical sound bites to accompany the narrative, and pullout ephemera to easily add to an existing collection, or inspire a new one. Insightful, entertaining, and truly fun to read – The Rocky Horror Treasury is a must for long-time fans, and an important primer for Picture Show virgins who have long wanted to see Dr. Frank-N-Furter perform in person.