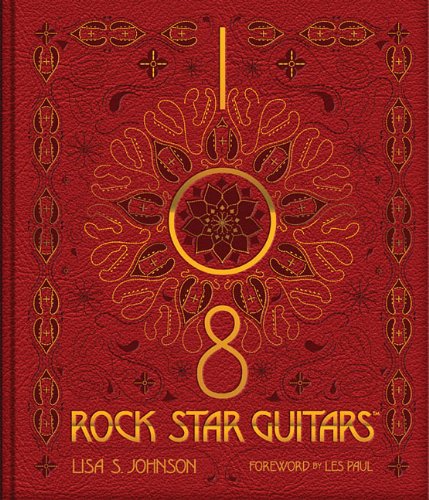 The author has photographed the primary guitars played by 108 rock stars. Many are household names, like Eric Clapton, Slash, or Joe Satriani. The great majority of the guitars photographed are solid body electric guitars. A few of the artists, like Jorma Kaukonen, and Ann Wilson chose only to have their acoustic guitars included. Another dozen or so players allowed the author access to both acoustic and electric guitars.

In many cases the author never dealt with the “stars” involved, but had access to their instruments through road managers or guitar techs. The text of the book is most interesting when she deals directly with the owners of the guitar. For example, Randy Bachman who has achieved stardom with The Guess Who and Bachman-Turner overdrive got his most valuable instrument in 1968 when a young fan insisted on trading him his Les Paul instrument for a Mosrite that Randy was then playing. Randy argued with the fan, insisting that it wasn’t a fair trade, but the young man was insistent. Randy then emptied his pockets, taking out $72, which was all the cash he was carrying. Randy’s “new” guitar, according to the author, is now valued at a million dollars.

My only complaint about this book is that I wish that it had included more such stories. Even a guitar collector can benefit from knowing the story behind an instrument. In any case, if you enjoy or collect guitars, especially electric guitars, you’re going to love this book.