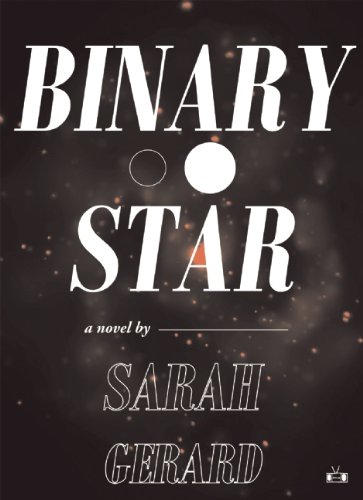 A binary star system consists of two stars, bound to each other by gravity. Two stars that move around each other, burning from within, in seemingly stable orbits, each impacting the evolution of the other. Sarah Gerard tapped in on this stellar metaphor in her slim, poetic exploration of a nameless protagonist struggling with a self-consuming eating disorder. The narrator and her addicted, unpredictable boyfriend, John, go on a road trip with the intention of closing the gap in their dysfunctional long-distance romance and to wander outside of their daily lives in search of something, anything.

Before they leave she confesses:

“I tell him that I’m bulimic, which is also true, but not the whole truth.

You can’t purge when we’re away.

Then you can’t drink, I say.

We make a pact for balance.

We’ll shed our lives in order to see ourselves clearly.”

The entire trip she pops Hydroxycut, pounds coffee and cans of Red Bull, and purges in silence in bathroom stalls. She buys tabloid magazines at truck stops and rattles off lists of slim celebrities, weight loss products and diet-fads. She counts down her weight like a ticking bomb as her addiction both literally and figuratively consumes her. John mixes alcohol with his bipolar medication, becomes violent at times – at one point he slugs a guy with a golf club – and becomes an increasingly narcissistic asshole. During the trip they visit a bookstore in Portland, OR and discover veganarchism, an activist ideal they latch on to that enables both her eating disorder and his ill-tempered disposition.

Gerard threads her narrative together with factual descriptions of the fates of stars. This central metaphor illuminates a relationship fraught with disconnection and bolsters the book with a poetic urgency that reminds us of the beauty that lies in destruction and chaos, of the churning wonder of the cosmos, and of the overwhelming weight and confusion of a vacuous culture that feeds us unrealistic ideas of what our bodies, our minds, and our hearts are supposed to be.

Binary Star, in its slim lyrical form, burns just as hot and bright. True to its content, the book is addictive and demands to be read in a single sitting. Gerard’s prose is stunningly poignant and alluring. Through lists, one-sided phone conversations (the narrator’s phone monologues with her mother slayed me in the best way) brutally honest prose, and a poetic field-guide of astronomical occurrences, Binary Star is an agonizing exploration of addiction and alienation. It reminds us that, like stars, we spin in space, consuming energy, inadvertently affecting and shaping each other, while ultimately struggling with and within ourselves, alone.

Though it may sound bleak, Binary Star ends by orbiting a flicker of hope. As you reach the last line of the narrator’s journey, this spark flares up and burns through the darkness as it grows brighter and brighter with a light that will have no choice but to reach you.