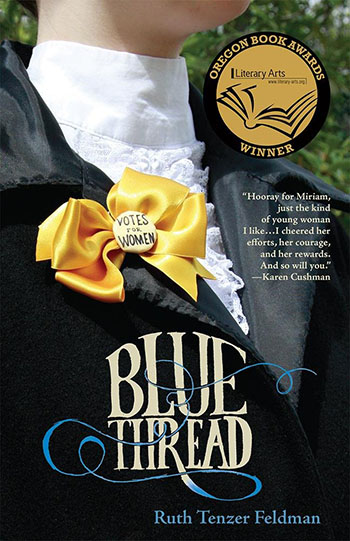 Blue Thread is the story of Miriam, a high-spirited young Jewish daughter, growing up in Portland Oregon during early 1900s. She is struggling to learn about her ancestry after meeting a mysterious young lady at a demonstration for women’s suffrage in 1912, and is thwarted by her father’s desire to keep the past buried. Her desire to become a printer in her father’s print shop during a time when women married and stayed at home to manage a household is also an unending battle with both of her parents. She has an ongoing conflict with her father that proves to be life changing for her after she locates an ancient family shawl with a magical blue thread. A mysterious woman, Serakh, guides Miriam through time using the magic of the blue thread. She needs Miriam’s strength – leaned through her trials in her own time – to inspire others from ages past.

“You know, Mama, I’m not the only one in this family who ‘s hiding something.”

Miriam is a character that is easy to root for. The story flowed easily throughout the conflicts in Miriam’s life and added a few magic imaginations to emerge. Readers will find Miriam to be a strong, proud young woman holding onto her beliefs. Readers will find her intriguing as she grows with her new determination to become a businesswoman herself and wondering where Miriam’s story will lead her next.