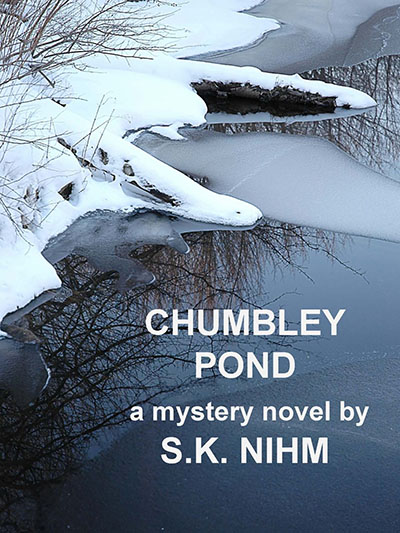 Chumbley Pond is an ambitious novel, weaving several plot threads into a cohesive whole. It is not a typical mystery, but there is plenty of mystery to unravel. We follow Trey Chumbley, initially perceived as a stereotypical, spoiled, rich brat; Alice Chumbley, Trey’s beautiful mother; Russell, a common boy from the Vermont countryside; Frank, Trey’s father, a wealthy banker prominent in the community; and Leon, Frank’s trusted right-hand man, around whom much of the suspense revolves.

There is another major character, and that is Chumbley Pond itself, whose secrets are slowly and
carefully revealed.

One of the threads is a rite-of passage tale, involving Trey and Russell. Trey is a couple years Russell’s senior. Their relationship begins with tragedy and slowly develops across misconceived perceptions, school divisions, and the backdrop of Vermont social hierarchy. Their friendship is an improbable one, but well told.

“Maybe this is how it is to grow up, sort of telling lies because telling the truth might hurt somebody.”

And that’s one of the issues with Chumbley Pond. It is almost entirely told. We are told what the characters feel without an opportunity to feel it ourselves. At times, Chumbley Pond reads like a very detailed plot synopsis. S. K. Nihm’s writing style harkens back to nineteenth-century literature, when the telling of the tale was done almost exclusively by an omniscient narrator. Though we are privy to the characters’ thoughts, there is very little dialogue, and we don’t learn about the characters through their actions. We are told what happens, not shown. The realization of truths in this story compels the reader to turn pages, but there is no intimacy between reader and character. In several places, the book feels like a draft of a promising story and would benefit greatly from a professional edit.

Leon is the story’s most complex character. He is a lonely man who struggles to balance his past, his
duty, his perception of himself, his own desires, and his deep commitment to Frank, Alice, and Trey. We learn his innermost thoughts through Nihm’s telling. He is a study in pragmatism. His dialogue is
mostly internal. The conversations we do get to hear show the workings of his mind, and the novel
would become much more satisfying if we were able to hear more.

S. K. Nihm’s Chumbley Pond is a good story, even with the characters struggling to pop from the page.
The plot threads do not seem contrived and carry the reader through two generations of history to the
end. The heart of the novel is rich with intrigue, but the book would be much more satisfying if the
characters were allowed to show more of themselves.