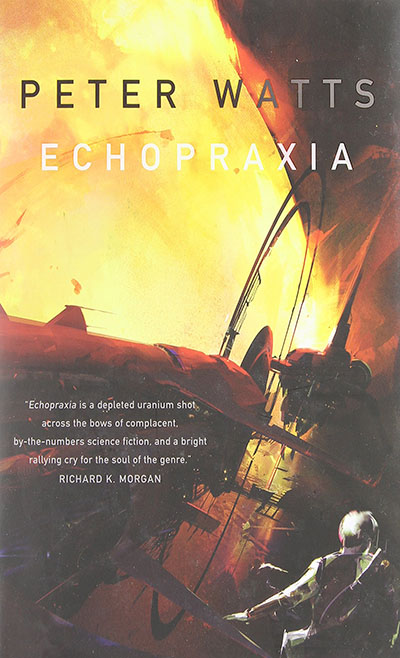 In a future world where humanity has destroyed much of the natural world in the pursuit of vast technological jumps, field biologist Daniel Brüks finds his refuge in the remote Oregon desert to be suddenly and violently invaded. Desperately running for his life Daniel seeks the dubious refuge of the monastery of the Bicameral Order, only to realize too late that the zombies appeared to be targeting the monastery to begin with. Swept up into events far beyond his control Daniel becomes an unwilling passenger on a spaceship with an unlikely crew on their way to investigate the silence of Icarus, earth’s last hope tucked into the center of the solar system.

Echopraxia is an incredibly complicated and surprisingly philosophical science fiction novel. The sequel to Blindsight, Echopraxia continues to explore the futuristic world with new characters. While there is an almost ridiculous amount of information the author is trying to convey to the readers, there is a remarkable lack of action throughout the book. After Daniel’s early rush to the monastery, and their flight from the attacking government chemical attack, the bulk of the narrative takes place while the characters are cooped up in a small space ship on their way to Icarus. Much of the “action” takes place as extended existential, psychological, theoretical, philosophical, and sociological conversations Daniel has with himself and other members of the crew. In these conversations you learn about what humanity has done to their planet, how a vast majority live within VR uplinks to a VR world called Heaven, how humans have created zombies – humans completely, or mostly, controlled by others – and how many of the people turned into zombies did so voluntarily. The book touches on questions of scientific progress: how much is too much, and whether or not humanity crossed a line.

In the middle of all this, there is the hovering level of terror that is created by the presence of the vampire Valerie on the ship. Her character is fascinating, particularly as readers learn more about her as Daniel slowly gathers information during the trip. Unfortunately she remains mostly mysterious as her motivations and the majority of her actions are never made clear.

The character Daniel himself raises more questions than are answered. As a protagonist he is an incredibly weak character. The majority of the book is him observing and discussing things with the other characters, which makes the reader wonder why on earth he was brought on board in the first place when he doesn’t actually do anything to further the story. Daniel is dragged from one event out of his control to the next like a useless, unwieldy bag of flour, right up until the incredibly confusing ending. It is implied that Daniel’s presence on the ship was orchestrated by outside forces from the beginning, even though his influence was minimal to nonexistent.

Overall, Echopraxia is a mind-bending hard science fiction novel that is definitely not for the casual reader. While the thought provoking discussions within the novel are fascinating, there isn’t a whole lot that actually happens in the novel. The book will certainly be appreciated more by those who have read Peter Watts first book in the series, Blindsight, although it is possible to enjoy Echopraxia without having read its predecessor.