Gideon Smith and the Brass Dragon by David Barnett 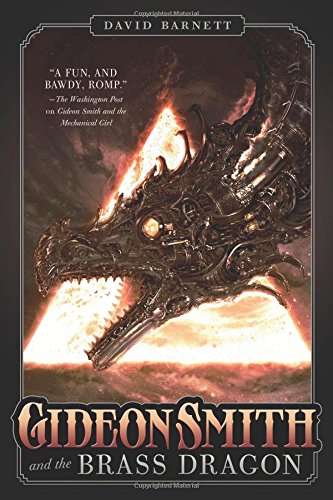 Gideon Smith and the Brass Dragon picks up a few months after the events of its predecessor, Gideon Smith and the Mechanical Girl. Gideon Smith has spent the last few months being trained to be an agent of the British Empire to be a replacement of sorts for the recently deceased Captain Lucian Trigger – the former Hero of the Empire. His training now deemed complete, Gideon is sent to the American colonies to track down the brass dragon stolen by Louis Cockayne, and hopefully be reunited with Maria, the clockwork girl who mysteriously controls the weapon. However, Louis and the dragon are being held in Steamtown, a city in Texas outside of the empire where money talks, and coal and slavery grease the wheels. Gideon Smith will have to use his wits and will quickly learn if his training was enough.

This steampunk sequel is best consumed shortly after reading the first book in the series, as Gideon Smith and the Brass Dragon wastes no time jumping into the swing of things with only a brief paragraph here or there to reintroduce characters and events from the first novel. The most interesting part of the book comes from the author’s reimagining of what might the American continent might have been had the colonies lost the revolution, and steam powered technology been the future. The writing is solid, the characters are intriguing, and the story itself is fast paced and entertaining. While not offering anything particularly outstanding or noteworthy in the genre, the book is a fun romp, but probably is not one for the permanent collection.