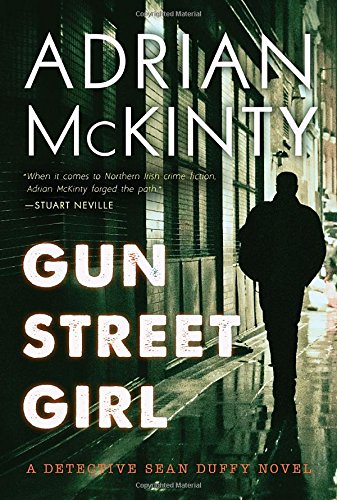 In this fourth Sean Duffy novel, the savvy, yet deeply flawed policeman meets his biggest challenge. Gun Street Girl is packed with all the great makings of a good detective thriller: murder, mayhem, gun runners, drug deals, prostitution, MI5, and a case that may ruin the detective once and for all.

“How did he die?”
“Blunt force trauma caused by jumping off a cliff.”
“Thanks, Jim, always a pleasure.”
I walked back to Sara, who was scribbling in her reporter’s notebook.
“You want to take a wee dander up to the lighthouse with me?”
“Of course,” she said enthusiastically.
“Let’s go then. Cause of death, by the way, was gravity.”

Adrian McKinty’s novel a thoroughly enjoyable mystery set in Belfast, Ireland, in 1985. This reviewer found it reminiscent of Lee Child’s first Jack Reacher novel, told with Guinness and an Irish accent. While it’s not a unique story in terms of plot, it is exceptionally well told with a fantastic, darkly funny narrator, terrific, engaging descriptions, and that heart-pounding tension of a well-told thriller. There’s a gritty reality to the book that doesn’t overstep the mark and treats a lot of clichés gently enough they feel plausible and relatable. Sean Duffy is a complex protagonist, gruff and possessing a keen, dark humor. The church social where he meets reporter Sara Prentice is absolutely priceless, and illustrates the range of storytelling—from gritty Belfast streets and grisly murders to checking beneath your own car for bombs to painfully awkward 80s-style dating and spot-on eye for the absurd, even in the darkness.