Jackie: the Adventures of a Little Boy Trying to Grow Up by John Tammela 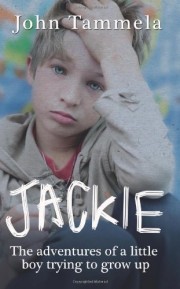 Jackie: The Adventures of a Little Boy Trying to Grow Up is just that, a tale about a boy living in Canada during the 1930s and 40s. It’s a true story based on the author’s early years, and it outlines a variety of different adventures that Jackie goes through on his path to growing up. There’s the initial excitement of the first day all the way to the uncertainty of having to move away from your childhood home.

Jackie is written in the style of many little books within a larger book, as it doesn’t have an overall arc but it does tell many small stories within the big story. It’s a lighthearted read in general and it explains all of the fears that many small children go through when they’re growing up; like being terrified of the school nurse and disliking a few of your elementary school teachers. The tone of the story is enjoyable, as the author makes it clear that in the beginning, Jackie is a very young boy. As these small vignettes progress, the reader can see a significant change in the voic e of the story as Jackie grows up and pulls farther and farther away from being frightened of everything. Jackie’s progression is the most enjoyable thing about the story; he is prone to avoiding activities at the beginning of the novel because they frighten him, but by the end he’s determined to prove to himself and everyone around him that he’s capable of doing whatever he wants to do. Some of the stories do feel misplaced, an example being Jackie creating a new ‘imaginary friend’ based on a boy who has recently come to his school. It’s a thread that is never picked up again in the entirety of the novel, leaving the reader to wonder why it was important to place it within the story in the first place. Overall, the novel is readable and a fun, and something to pi ck up if you’re looking for a quick read.

Diana Jennifer is a native Tucsonan with a passion for Netflix and for staying indoors as often as possible. She has no degree, but she’s pretty good at reading and sometimes she remembers how to write. Some of her favorite genres to read are fantasy, horror, and science-fiction. She is an unabashed lover of Daryl Hall and John Oates (yes, she can go for that). She works as a banker for a local call center and is always looking for ways to make the perfect cup of coffee. Her biggest goals in life are to keep the tank of gas in her car filled up and win the war against the bugs.
You might also like

by Sarah Hutchins on June 13, 2019
In 2001, cultural historian Kendall Taylor, Ph.D. published Sometimes Madness Is Wisdom: Zelda and Scott Fitzgerald: A Marriage. Now Taylor returns to the same subject matter in The Gatsby Affair: Scott, Zelda, and the Betrayal that Shaped an [...]

by L Ruby Hannigan on May 7, 2019
Huda grew up in sunny California, the daughter of Iraqui immigrants. The pressures of religion and family customs were tested on Huda at a young age. She had to dress modestly for her family while she dreamed of wearing clothes like her favorite [...]

by Don Messerschmidt on April 22, 2019
Paulo Coelho, the internationally popular Brazilian writer, has published 18 books to date ― fiction, non-fiction, and occasionally a mix of both. His most popular titles include The Alchemist, Pilgrimage, Adultery, and a novel entitled Spy. [...]
Comments
Leave a reply