Meet Your Baker (A Bakeshop Mystery) by Ellie Alexander 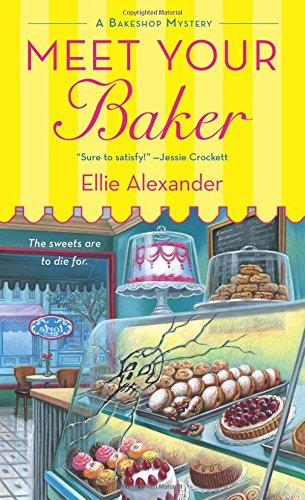 Meet Your Baker is one in a series of ‘Bakeshop Mysteries’ set in Ashland, Oregon, home of the Oregon Shakespeare Festival (the OSF). And grand theater it is. The author, Ellie Alexander, has baked up a delectable tale of murder and intrigue, as well as tasty pies, puddings, and pastries. This Whodonut… er, Whodunit, is well spiced with sweet treats and artisan coffee, enough to keep the reader guessing (and happy) and with every turn (over).

The protagonist is Juliet Montague Capshaw. Yes, as in those theatrical lovers, Romeo (Montague) and Juliet (Capulet). Clearly, the book’s author is an avid van of The Bard and cannot resist the name game. It’s part of what gives this cozy mystery its charm.

Juliet has just returned to landlocked Ashland from a stint on the high seas as a cruise ship pastry chef, and is in a quandary over a seemingly failed love affair. Back home working with her widowed mother at the Torte, the family’s bakery shop, she steps into the mix (figuratively) and ends up trying (dangerously) to figure how and why a snobbish lady from the OSF has died in the middle of the night inside the Torte. Since nobody seems to like her, there are lots of suspects. But, was it murder? Maybe it was an accident, like a lot of other happenings around Ashland’s theater and the bakery shop.

Along the way Juliet, who prefers being called Jules, bakes up some delicious sweets, and provides useful tips to her fans (at home reading mystery novels) about how to bake better pastries. And as a special gift to her happy readers, she shares seven enticing recipes, each of which plays a role in the story. Try her ‘Natillas,’ a Spanish pudding, and her Chocolate Hazelnut Torte (they both sound irresistible), and sip a red hot Sweet Heat Espresso that the Torte’s youthful barista has concocted.

This Bakeshop Mystery is a real page-turner, and we look forward to others in the series, just as tasty.

Oh, and one more thing: Early in the book you’ll meet ‘The Professor,’ Ashland’s clever detective. On the side The Professor moonlights as an actor and while solving crimes he has a habit of spouting appropriate lines from Shakespeare. By the time you get to the end, you’ll understand “The wheel has come full circle…,” a line straight out of King Lear.