Philosophy: An Illustrated History of Thought (Ponderables: 100 Ideas That Changed the World: Who Did What When) by Tom Jackson 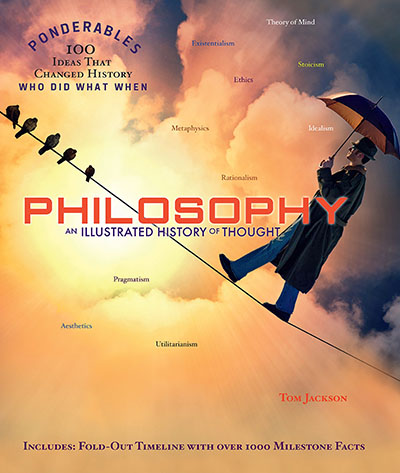 Philosophy: An Illustrated History of Thought by Tom Jackson is a beautiful oversized coffee table book from the series Ponderables 100 Ideas That Changed History Who Did What When. The illustrations capture the representations – busts, portraits, and photos – of the named philosophers but also figures, illustrations, famous paintings, architecture, and photos that help bring to life the people, era, and ideas.

“To many that might make philosophy seem like a dead-end waste of time, but just a short journey through history of philosophy can open you to new ways of thinking, give you many different ways of understanding your own existence, and perhaps make you question how you choose live.”

After a brief introduction on a general overview of philosophy, such as defining a philosopher as a lover of wisdom, the bulk of the book consists of 100 “stories” of the chronology of ideas that have shaped Western philosophy, as we know it today. Most are based on the major Western philosophers with the usual Eastern philosophers, such as Confucius and the Buddha, but there are also a few lesser-known names, especially in the pull out chart. The chart, which is also a timeline, would be great for a high school classroom.

Otherwise, every doctor’s waiting room should have such a book for people tired of the same old trite glossies.