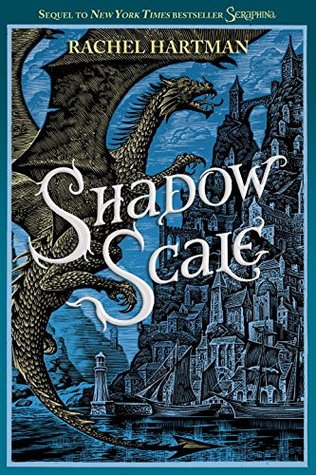 Rachel Hartman’s debut YA fantasy Seraphina was a blast of fresh air in 2012 – a gorgeously rendered Renaissance-style world featuring a thoughtful and unique take on dragons, complicated politics, and laced with a deep passion for and knowledge of music. And the entire tale was anchored by one of the most engaging heroines in recent memory – Seraphina, a musician hiding her half-human, half-dragon parentage amidst a society that deems her an aberration.

While Seraphina was a tale of bigotry and self-realization with a mystery heart, its sequel Shadow Scale – and the final book in the duology – is far grander in scope. War has fully erupted between dragons and humans (and their dragon allies) and Castle Orison’s best chance of defending Goredd is by sending Seraphina to far away lands in search of others who share her dragon-human heritage. Readers of Seraphina will remember our heroine’s magical connection to this disparate group of characters via their avatars in her psychic garden of “grotesques,” but Shadow Scale introduces us to the personalities, backgrounds, and actual faces of this large and highly varied cast, and Hartman gives each new character a distinct identity. The same can be said for the lands beyond Goredd, diverse in culture and language and geography; it’s an all-too rare feat of deft, complex and fascinating worldbuilding.

While Shadow Scale‘s expansiveness is impressive, fans may find themselves missing the intimacy of the first book – Seraphina’s relationship with her thorny dragon uncle, Orma, is especially missed here – and frustrated with Seraphina herself, who (for a while) comes across as passive in the face of the novel’s greatest threat and the havoc that enemy wreaks upon her allies throughout the course of the book. But just as the story threatens to drag to a standstill, the reader is thrust into an entirely new aspect of the world, and it’s this particular sequence that highlights Hartman’s exquisite and off-kilter imagination. Without giving anything away, it involves an aspect of dragon culture we’ve never seen and is vividly crafted. You can’t help but wish you could see the Jim Henson Company bring every wonderful and strange detail to life, and here’s hoping Hartman takes this aspect and runs with it in her future novels within this world. And for those hoping for a resolution to the feelings between Prince Lucian Kiggs and Seraphina, Hartman definitely delivers a refreshingly different and layered ending.

While perhaps not as emotionally involving as its predecessor, Shadow Scale is an epic tale of moral ambiguity, belief, loss, fear, and ultimately the triumph of will. This is a big read with big ideas, an endlessly intriguing world, and unforgettable characters.