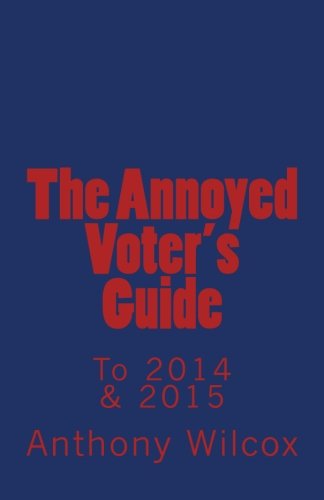 The Annoyed Voter’s Guide to 2014 & 2015 by Anthony Wilcox gives an in-depth discussion of the 2014 and 2015 elections, offering some speculation into the 2016 presidential race, explaining politics and their activists with insight and enthusiasm. The author is articulate in his opinions and states his goal is to inform and entertain readers, in the style of Jon Stewart, which he does to more serious success. This book is concise, informative, and relatable. For instance, the very first chapter is aptly titled “State of the Nation? Cranky, mostly.” Wilcox rides the line of disgusted voter, sick of being fed useless campaign information, and optimistic political science major, urging people to change the world.

Articulate and thoughtful, The Annoyed Voter’s Guide seeks to empower readers through explanation and encourage conscious decision-making. However, the one major problem with this book is that a good portion of it is already outdated. The 2014 elections have passed and while the 2015 gubernatorial and 2016 presidential elections are gearing up, there seems less to say on these, as the candidates have yet to declare their intentions of running for president. So until we know who the nominees are, it seems rather impractical to speculate as to who might win even before we know who might run. While the author does discuss what both parties leave wanting and some of the current issues, the large section devoted to the 2014 election does date this book and severely limits its potential for wider, long-lasting appeal.

“It’s difficult to ask people to care about politics when the product being put out for them is so uninspired and lifeless.”

That being said, the general thrust of the book is strong and inspiring: we are the people who can change the system, a system designed to serve our interests. And it’s a wonderful message, delivered with a down-to-earth, rational argument. This reviewer just wonders if that argument might have been better couched in a way not so time-sensitive.

Lastly, another great strength of this book is that Wilcox does not take a firm political side, instead urging readers to choose thoughtful candidates who seem to have a genuine interest in voter issues, and not base their decision-making strictly on party politics or campaign marketing information. Therefore, the biggest takeaway from The Annoyed Voter’s Guide speaks to the general voter in saying choose the best person for the job, be informed, and find new, innovative ways to participate in the democratic process. After all, we are the people who can change our system, one small action at a time.