The Lonely War: One Woman’s Account of the Struggle for Modern Iran by Nazila Fathi 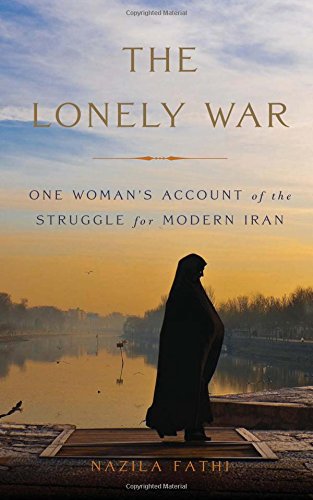 The return of the extremist cleric Ayatollah Ruhollah Khomeini from exile marked the transformation of Iran from a secular democracy into an Islamic republic. The Lonely War explores the ensuing thirty year period beginning with the overthrow of the Shah of Iran in 1979 when the author was just nine years old. Nazila describes her personal struggle, mirrored by millions of her fellow countrywomen, as her father was “cleansed” of his high profile job and her family began a slow slide down the social/economic ladder, culminating in her being labeled an enemy of the state and being forced to flee the country for fear of assassination.

Parallels between Iranian family lifestyles in the cities and the Western world pre-revolution are fascinating. Ice cream and monopoly, rock and roll music, TV, newspapers and magazines, short skirts, high-heels and bee-hive hairstyles were as prevalent in mainstream Iran in the early ’70s as in Europe or America. Eliminating “backwardness” after World War II was as important to the leaders of the country as modernizing the economy. Embracing other cultures and speaking “foreign” languages was considered essential to competing abroad. All of these proclivities were rejected wholesale by the new spiritual leaders who ensured that the next several decades insulated Iran from the rest of the world and vice versa.

The change is presented in stark before and after contrasts in her book. Childhood summers spent frolicking harmlessly poolside with male and female friends are replaced almost overnight by the constant monitoring of the morality police, “Pasdar,” who patrol the streets in white Nissan SUVs looking for the “enemy.” Women who once wore casual clothing are suddenly targeted as political dissidents if not covered up sufficiently, or if dressed in bright colors, or seen in the company of a man other than their family. The formerly disenfranchised rural poor and uneducated supporters of the revolution are suddenly recruited into the Pasdar, referred to disparagingly as the Persian Gestapo, and rewarded with positions of power and authority to wield over the former ruling classes.

All this is more memoir than it is historical study. Readers looking for a definitive history of Iran as seen from the world stage during the years 1979-2009 will feel that many important events were overlooked. There is no mention of the Israeli air strike that destroyed the nuclear reactor just south of Baghdad in neighboring Iraq, in 1981 at the same time that Iran was striving to develop her own nuclear power program. Also not mentioned is Khomeini’s religious edict (fatwa), proclaimed in 1988, to kill Salman Rushdie, living in exile in England, for his novel The Satanic Verses which was considered an insult to conservative Islam.

The lack of inclusion of these major events raises some questions: Was the book written on a tight deadline that forced the omission of these broader events? Were these events kept obscured by the government from people living inside the country? Or were sensitive topics omitted because, like Rushdie, the author is still considered an enemy of Islam? Regardless, Nazila’s account of the time period gives a memorable and valuable insight into life in a vibrant and diverse country having nearly one-fourth the population of the United States, lives that remain for the most part invisible to the average citizens of the Western world even today.