The Monkey King by Shobha Viswanath, Illustrated by Uma Krishnaswamy 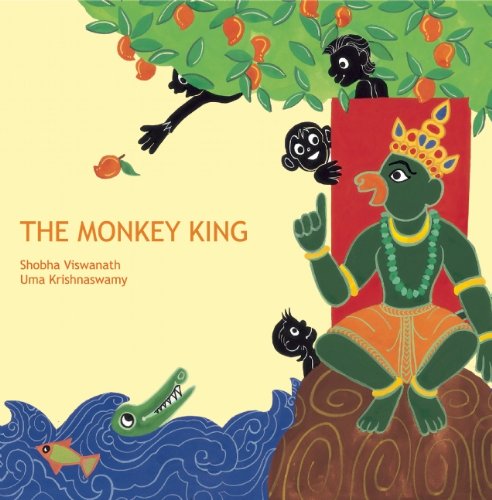 This is a simplified retelling of an Indian folk tale, in which Kapi, the Monkey King, protects his tribe of monkeys when humans come to their home in search of mangos. When the human king and his soldiers discover the mango tree, they are at first frightened of the monkeys, and shoot arrows at them. But when Kapi cleverly saves his tribe, the king realizes that Kapi is no ordinary monkey, and rewards his bravery.

The story could be confusing in parts. Some of this was due to the fact that there were three or four monkeys referred to by name, but only two were clearly identified in illustrations (Kapi the king, and the “bad guy” monkey Korung), so when the text described the actions of other monkeys like Vaayu or Maruti, there were no corresponding illustrations to show them, and it got a little hard to remember who they were supposed to be. Plus, why did Korung have to be so mean all the time? It was never quite clear, although he does repent his nasty deeds in the end.

However, there is a lot of action in the story, and both the descriptions and the illustrations are beautiful and evocative. You can practically taste the mangoes and smell the rose apple tree that the monkeys hide in. The art is vibrant, and captures the excitement of the story. This is a book that could make children curious to find out more about this part of the world.