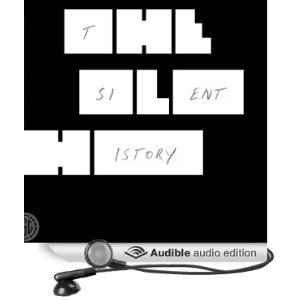 By 2010, they had started to be noticed. By 2015, America had a name for them. The next step was deciding what to do with them.

Presented as a series of recorded audio testimonials, each very short chapter (about eight minutes on the audiobook) of The Silent History is from the perspective of someone who is trying to address these questions. Some of these characters only show up once, but many are recurring, and all of them are interesting. Patti Kern, for instance, is one of the first to suggest that Silents have their own way of communicating, perhaps a more honest way than regular humans. But she also has a history of zealotry, and believes she is the chosen one meant to lead the Silents. On the other hand, Dr. Burnham has worked his entire life to find a cure for the Silence, without ever asking whether those afflicted want a cure. A prominent politician exploits the Silents in order to get their votes, but in return creates a community where they can be left alone. These are not characters you can easily judge, because you are given too rounded a view of them. You get inside their heads and understand their motivations, sometimes more deeply than they do, and see how the consequences of their actions are never black or white: they change some lives for the better and some for the worse

It is a testament to the brilliant writing that this is accomplished without feeling contrived or unrealistic. These characters feel real, an effect only bolstered by the amazing talents of the Audiobook readers, Gabra Zackman and LJ Ganser. Together, they provide a menagerie of rich voices for over a dozen characters, with accents ranging from Bostonian to Indian. The inflection is perfect, too, expressing each character’s rhythm so consistently that you’ll come to know it by phrasing alone: whether it’s Francine Chang’s stiff staccato or David Dietrich’s aggressive slur. This added element makes the Audible version of The Silent History the definitive version, and the recommended way to experience the story.

It’s fitting that the book works on multiple mediums, as the idea was conceived by McSweeny’s owner Eli Horrowitz as a way to test the power of story in different mediums. Originally, The Silent History was only accessible as a serial novel on the iPhone and iPad, uploaded daily over seven months. And there are many stories not included in the novel that you can only access by taking your iPhone (and The Silent History app) to specific locations around the country, where the unlocked narrative ties directly into the environment. While interesting as a concept, these extra “field reports” are not necessary to enjoy or understand the story, nor are they as fascinating as the primal questions asked by the main narrative.

Did humans create language, or do we exist because of language? What would become of us if language were removed? The goal of The Silent History isn’t to answer these questions, but to get you thinking about them. On its deepest level, The Silent History is about words. It explores what words mean to us, how words enrich our lives. And then it leaves us with the uneasy thought that, just maybe, words hold us back. Is our life better for words, or would we be able to communicate on a deeper, more honest level, without them? It is an important question, and The Silent History presents it with all the proper gravitas and depth of classic American literature, the kind of literature that should be taught in schools, shared online, and pondered by everyone able to read.